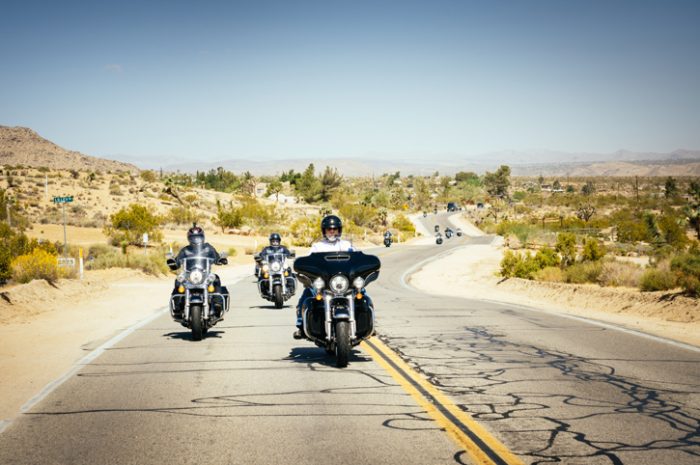 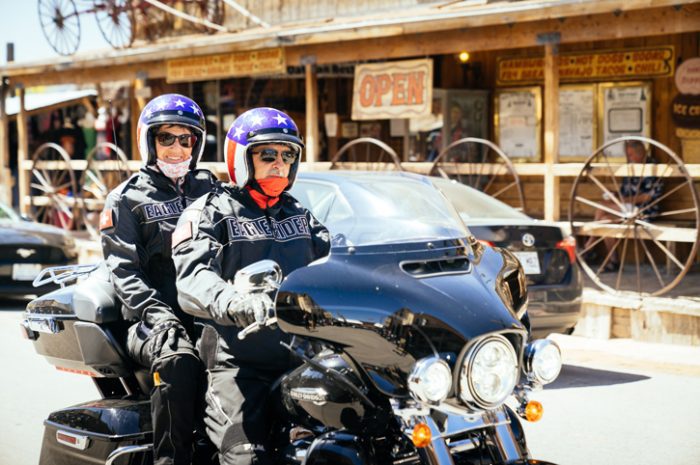 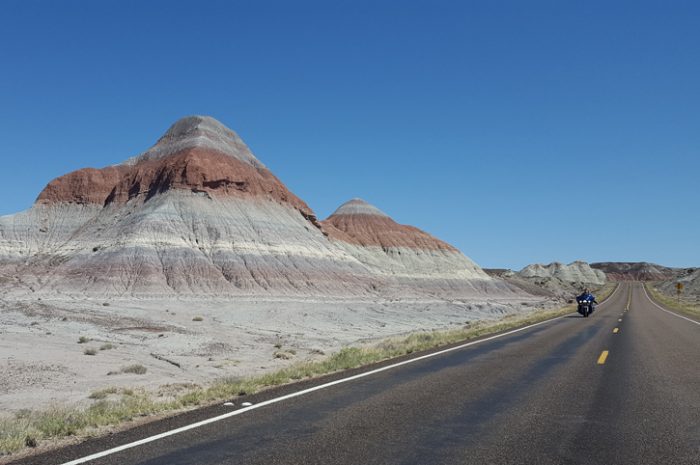 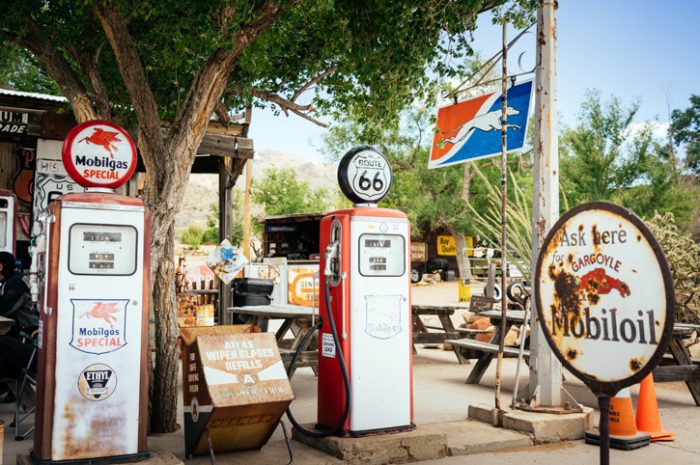 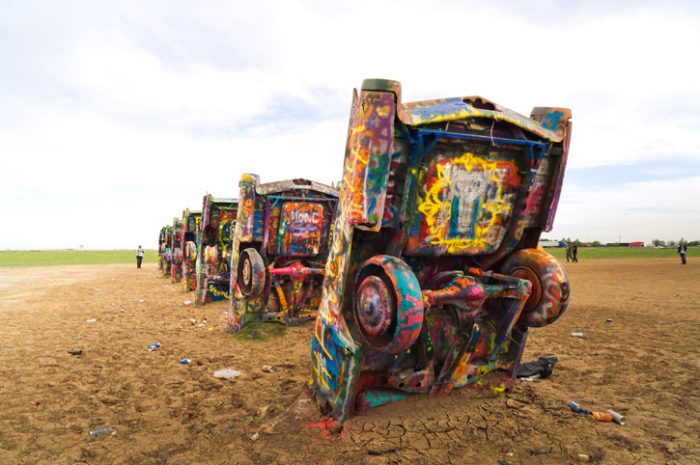 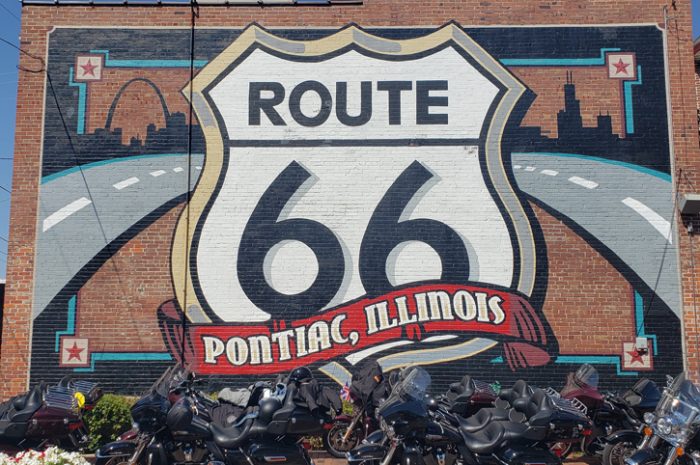 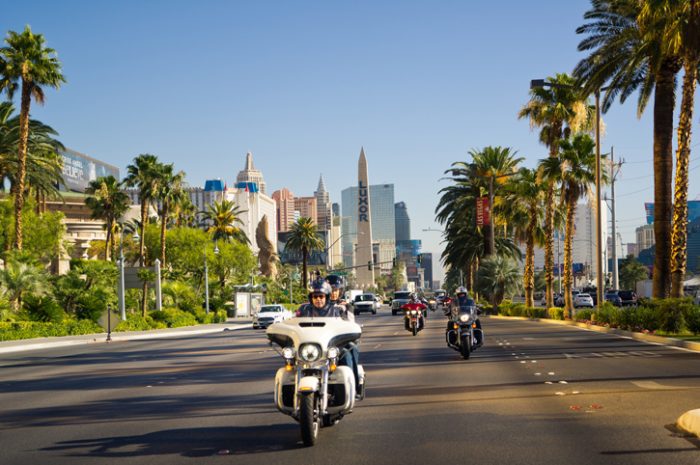 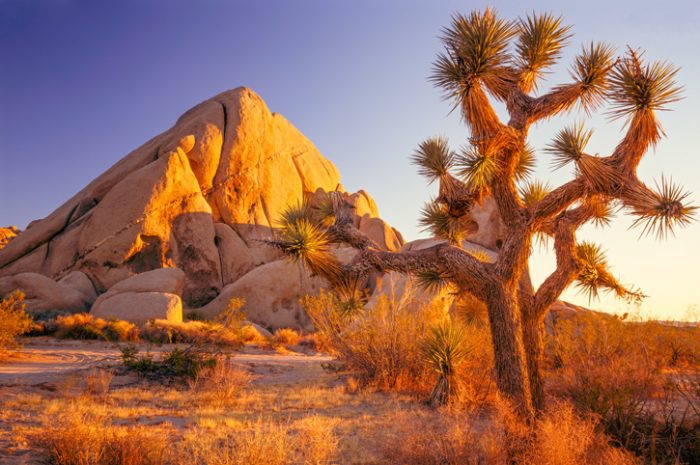 Route 66 on a Harley

A pulsating 2,400 mile, self guided American adventure along the ‘Mother Road’, riding from Chicago to Los Angeles. Choose your Harley or other model of bike.

You arrive at Chicago International Airport and transfer on your own to your hotel. In Chicago you are in the biggest and most exciting of the Great Lake cities. Chicago has a skyline to rival any city – an amazing selection of top rated museums, restaurants, cafes, bars and nightclubs pay homage to the city’s strong jazz and blues heritage.

This morning you pick up your bike and are off on the ultimate American road trip. Parallel to I-55, the legendary Route 66 began its run right here, cutting through the state before running all the way to the Pacific Coast. Get a glimpse of the old-time diners and other Americana that still stand. From Chicago you head south, pass the old truck stop town of McLean, and roar through the coal-mining area of Illinois – along the Pontiac Trail towards Springfield, the Illinois state capital.

Your ride will take you further south as you head toward St. Louis and your overnight stop in Rolla. Along the way there will be numerous Highway towns, which invite you for a stop en route. You should see the famous Dixie Travel Plaza, ‘Our Lady of the Highway Statue’, Litchfield and the ‘Paris Stop Café’. Take time to visit Meramec Caverns as you head for the Mississippi River and don’t miss the famous ‘Chain of Rocks Bridge’.

You are in Missouri now, the state where the forests meet the prairie and the Mississippi River meets the Missouri River. Enjoy the short ride today into the ‘Gateway to the West’, St. Louis. This amazing city rests along the shores of the mighty Mississippi River and is home to some of the best live music and BBQ ribs in the country. You will then continue to Rolla, MO, known as ‘The Middle of Everywhere’ for your overnight stay.

From Rolla your ride will take you along the northern edge of the Ozark Mountains, which occupies most of southern Missouri and northern Arkansas. This area remained frontier territory until the timber companies moved in at the end of the 19th century. None of the Ozark Peaks are particularly high, though the roads through switch, dip, climb, and swerve to provide stunning views of steep hillsides thick with oak, elm, hickory, and redbud – all quite resplendent in fall.

Ride through the famous towns of Lebanon and Conway and stop in Carthage to see the old beautiful courthouse. Before you enter the state of Oklahoma make a stop in Joplin. Oklahoma contains more miles of the old highway than any other state and is a great place for bikers and old-road fans. Today’s destination is Tulsa, Oklahoma. From its early days through its peak as an oil-boom town and up to the present, Tulsa has always been a city striving to move forward.

From Tulsa you head west through Oklahoma to your stop in Clinton. Cover a hundred miles of the Old West’s Indian country between Tulsa and Oklahoma City. In the 1830’s all this land, held to be useless, was set aside as Indian Territory – a convenient dumping ground for the so-called Five Civilized Tribes who blocked white settlement in the southern states. The Choctaw and the Chickasaw of Mississippi, the Seminole of Florida and the Creek of Alabama were each assigned a share, while the rest was given to the Cherokee from Carolina, Tennessee, and Georgia. Today, the state has a large Native American Indian population – ‘Oklahoma’ is the Choctaw word for ‘red man’. Further west you ride through El Reno – over the mile-long bridge, near Bridgeport and into Oklahoma City, the heart and soul of Route 66 country! Continue to our overnight stay in Clinton.

This morning you should rise early for your journey into the Panhandle, the southernmost portion of the Great Plains, often called ‘the real Texas’. It certainly fulfils the fantasy of what Texas should look like. Once the buffalo – and the natives – had been driven away from what was seen as perilous and uninhabitable frontier country, the Panhandle began to yield great natural resources in the 1870’s. Helium, oil as well as agriculture, brought wealth to the region and is home to some of the world’s largest ranches. Amarillo may seem cut off from the rest of Texas, but it stands on one of the great American cross-country routes – I-40 (once legendary Route 66), roughly 300 miles from Albuquerque and 250 miles west of Oklahoma City. Amarillo takes its name from Spanish and it means ‘yellow’, the colour that is so characteristic to this region. Why don’t you enjoy dinner tonight at ‘The Big Texan Steakhouse’?

Today you leave Texas and are on your way into ‘The Land of Enchantment’, New Mexico. Be sure to pass through the world-famous Cadillac Ranch before leaving Texas. Stop at the ghost town of Glen Rio, where you can stand with one foot in New Mexico and the other one in Texas. With 4 states behind and 3 still ahead, you ride your bike through the land of Commanche Indians and into Tucumcari, the biggest town between Albuquerque and Amarillo. You head up into the high plains of Santa Fe in central New Mexico. Santa Fe is one of America’s oldest and most beautiful cities, this will be your base for the next two nights. Enjoy our hotel in Santa Fe close to the historic town square and mission.

Today is at leisure to rest and enjoy the distinctive flavour of this nearly 400-year-old city. The blend of cultures here becomes evident in the southwestern architectural style so closely associated with New Mexico’s capital city. Perhaps you would like to take a ride along the river valley to the old Native American Indian town of Taos, enjoy a sunrise hot air balloon ride, or play cowboy for a day on a horseback ride along a mountain or canyon trail.

This morning you head south, down to Albuquerque, New Mexico’s largest city, home to a third of the state’s population. Albuquerque is sprawling at the heart of New Mexico, where the main east – west road and rail routes cross both the Rio Grande and the old road south to Mexico. You cross the Rio Grande and head west out into the open country and the hues of the Navajo wilderness. Further on ride through Grants and along Cibola National Forest towards the famous Route 66 town of Gallup, an old railroad town and Indian stronghold. Enjoy your stay tonight with a host of fellow riders from around the world at one of the many biker friendly hotels in Gallup.

From Gallup it’s only about half an hour to the Arizona border. Once you enter Arizona enjoy a very scenic ride through the Petrified Forest, a fossilized prehistoric forest of giant trees that has been unearthed by erosion. Just west of Petrified National Forest you get to Holbrook and Winslow, two old Route 66 towns that are kept alive by transcontinental truckers. Tonight you will stay in Flagstaff, the northern Arizona community on historic Route 66 and is the regions hub for visits to the Grand Canyon.

Today you will be able to visit one of the Natural Wonders of the World, the Grand Canyon. The Grand Canyon comprises of layered rocks, cliffs, hills, and valleys and is among the earth’s greatest on-going geological spectacles. Today you will have plenty of time to ride along the rim and stop for amazing vistas and photos. Tonight you will overnight in Williams where you can walk, dine and shop in this historic downtown on Route 66.

Cruise down ‘Memory Lane’ and head towards the town of Seligman, one of the longest surviving stretches of the ‘Mother Road’. From Seligman, Route 66 heads off on a northern loop through the Hualapai Indian Reservation and a dozens of quickly fading towns. From Seligman you stay on Route 66 all the way into Kingman. Leaving Kingman, stay on Route 66 via the Oatman Highway. Continue on Route 66 / Oatman Highway as you wind through the canyons surrounded by active and extinct gold mines. The town of Oatman is considered a living Ghost Town. Much of the village stays true to its heritage with staged gunfights and wild burros wandering the streets. Continue to the magical oasis in the dessert, Laughlin.

Today it’s off to California, the final state on your ride down legendary Route 66. Ride along the Mojave Desert, which offers some of the most dramatic scenery in Southern California…rolling with lush grasses, startling volcanic formations, large stands of Joshua trees, and even in some Pinyon pines. From the desert you get right into the cool pines of the San Gabriel Mountains. Head for Victorville, which is your base for tonight.

Today you are on your way to the final destination of your legendary American road trip, Los Angeles. You head for the end of Route 66 at the Santa Monica Pier. Santa Monica is one of the oldest and largest LA’s resorts. Once a wild beachfront playground, it is now a self-consciously liberal and healthy community. Spend the afternoon sightseeing and enjoy Hollywood with the famous Chinese Theatre, Beverly Hills, Rodeo Drive, and much more. Riders always have mixed emotions as they stand at the ‘End of the Trail’ sign on the Santa Monica Pier. There is a sense of joy and elation at having completed a journey most people only dream about, and a sense of sadness at the thought of the ride having come to an end. The great news is that next ride is just a dream away, and EagleRider looks forward to welcoming you back very soon.

Today your exciting trip will conclude in Los Angeles. After dropping your bike back at the depot, make your way to the airport to catch your scheduled flight back to the UK.

Price is per person, based on 2 sharing a double or twin room and includes pre-booked accommodation, motorcycle hire and unlimited mileage. Hotels specified are subject to availability and may be substituted by one of a similar or higher standard. Itineraries may vary for tours departing from 1 April 2022 onwards. 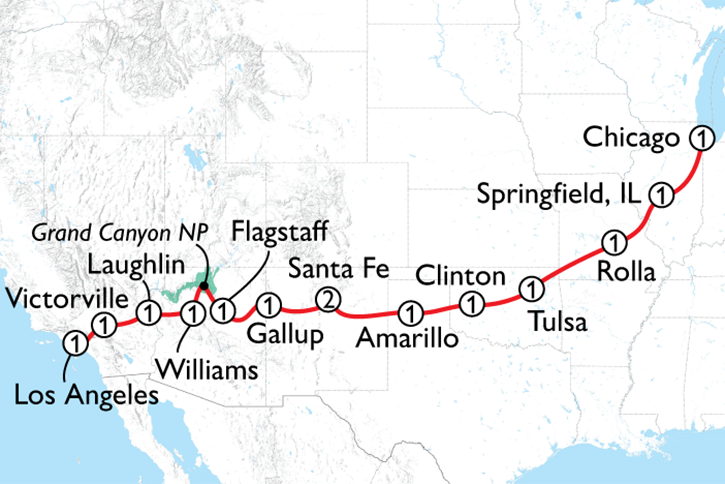 Enjoy independent touring at its very best. You can book our motorcycle tours as they are or add extra days in the places you choose. Normally available in both directions.

Your self guided motorcycle tour includes: