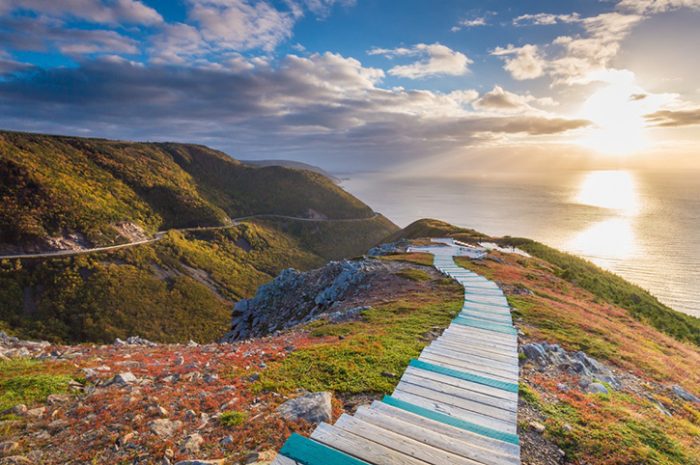 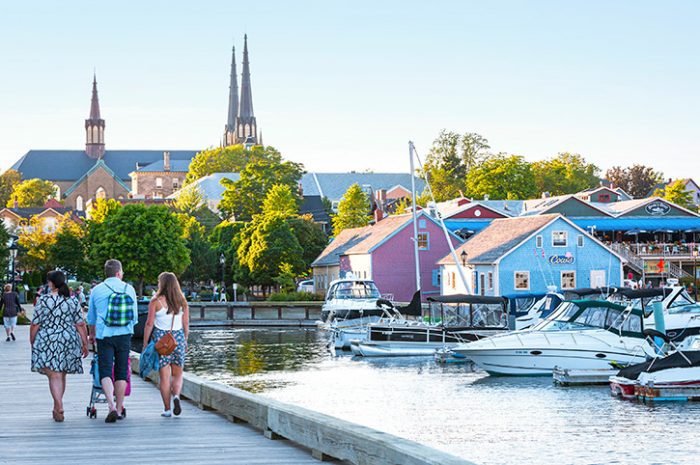 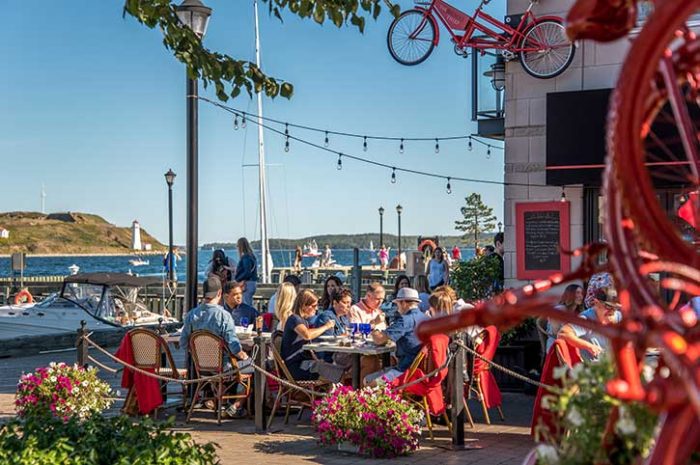 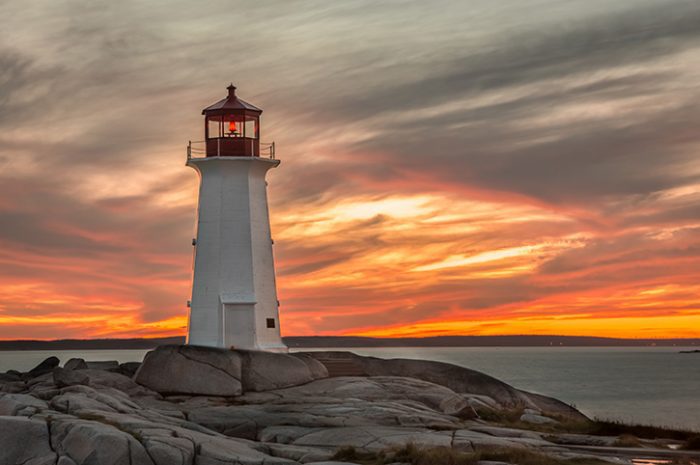 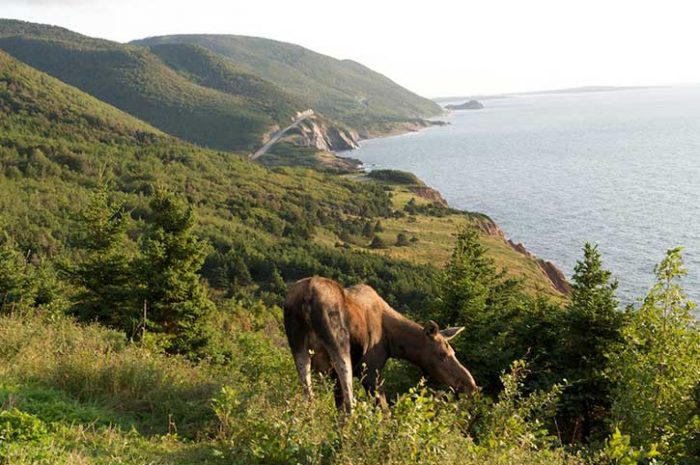 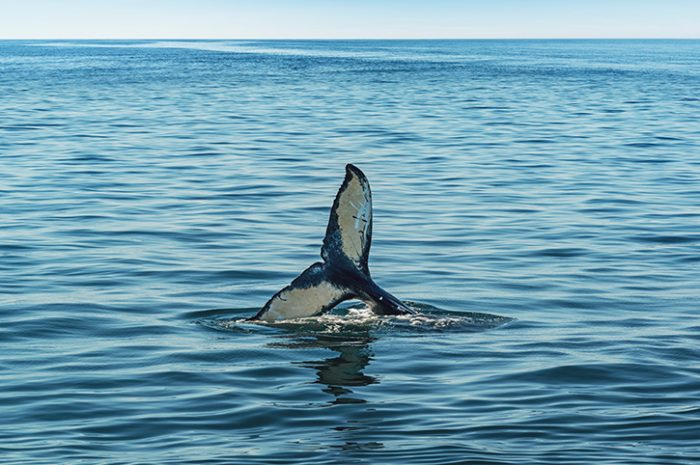 Explore the best of Canada’s Maritime Provinces on this well planned 14 day self drive around Nova Scotia and Prince Edward Island.

Arrive in Halifax, pick up your rental vehicle and explore this true maritime city. First settled in 1749, Halifax today is Nova Scotia’s capital and the largest city in Canada’s Maritime Provinces.

A full day in Halifax to explore boutiques, pubs and cafes of Privateers Warehouse and Historic Properties, tour the Bluenose II (see the ‘tails’ side of a Canadian dime for a picture of the Bluenose I). Get a terrific view of the city from the Halifax Citadel National Historic Site and visit York Redoubt National Historic Site a 200-year-old fortification overlooking Halifax Harbour.

Head south to Lunenburg, visiting Peggy’s Cove along the way. Peggy’s Cove (28 miles) is a small village with houses built right into the granite rock and a lighthouse overlooking the Atlantic. Old Town Lunenburg (60 miles), a UNESCO World Heritage Site, is a lovingly restored Victorian town that begs you to wander and explore.

Cross the peninsula and make a stop at Kejimkujik National Park and National Historic Site, renowned for its hiking trails and incredible canoeing on wilderness lakes and rivers. Park interpretive staff conduct outings on foot to reveal the natural history of the area, including the Mi’kmaq pretoglyphs. Continue along Route 8 to Annapolis Royal.

Today drive 64 miles along the Digby Neck to experience a whale watching excursion in the nutrient rich waters of the Bay of Fundy. You will likely see Finback and Minkes, Humpbacks or even the rare North Atlantic Right Whale. Spend the afternoon exploring Annapolis Royal and Fort Anne.

Make time to stop at the Grand-Pré National Historic Site, commemorating Grand-Pré area as a centre of Acadian settlement from 1682 to 1755 and the Deportation of the Acadians, which began in 1755 and continued until 1762. Also, the Domaine de Grand Pré is a fantastic winery in the area well worth a visit.

En route to Charlottetown, be sure to make time to stop and see the Bay of Fundy a marvel of nature. You will cross the 8 miles long Confederation Bridge.

Explore Charlottetown site of Canada’s birthplace – Province House National Historic Site was the scene of meetings that led to the formation of Canada as a country in 1867.

Allow a full day to drive with time to get out and hike or take in the stunning views. There are 28 beautiful hiking trails in the National Park between Cheticamp and Ingonish. The most recommended one would be the Skyline Trail which is located about 15 minutes drive from park entrance. Explore the fabulous Cabot Trail around Cape Breton Island for awe-inspiring views of the Gulf of St. Lawrence. The route winds through Cape Breton Highlands National Park.

This morning head north to discover the Fortress of Louisbourg National Historic Site. This incredible ‘living museum’, largest historical reconstruction in North America, is an impressive restoration of a French garrison town dating from the 1700s, complete with costumed interpreters who re-enact daily life from the French colonial period. You can even sample period food in the restaurant, or take part in a mock battle.

Also, don’t miss a visit to the Alexander Graham Bell National Historic Site in the village of Baddeck, a museum dedicated to the life and inventions of this fascinating man – who spent his summers here on the shores of the Bras d’Or – Alexander Graham Bell National Historic Site is located on Chebucto Street (Route 205), in a residential area on the east edge of the village of Baddeck. You may also want to visit the Highland Village Museum in Iona.

A full day for the return trip to Halifax along the scenic Bras d’Or Lakes Drive to the Canso Causeway to enter mainland Nova Scotia. At the community of Antigonish, travel southwest along Marine Drive to your destination.

Your self drive concludes today when you return you hire car to the depot. Head for the airport for you flight back to the UK. Or you could choose to stay a little longer in this harbour city.

Include this Self Drive Holiday in a holiday
designed for you 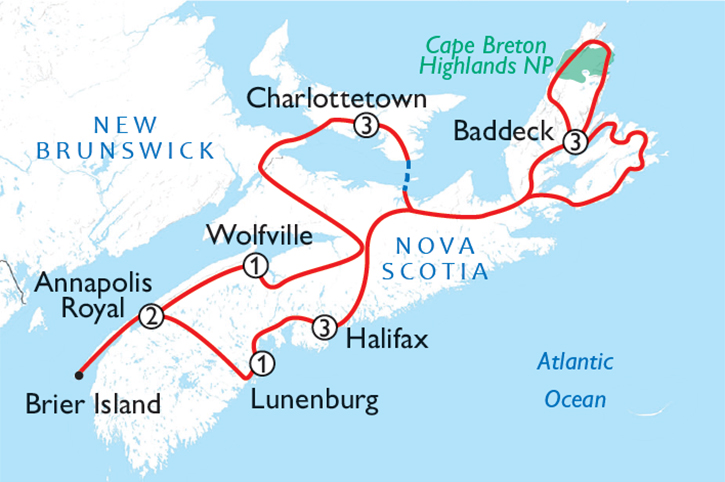