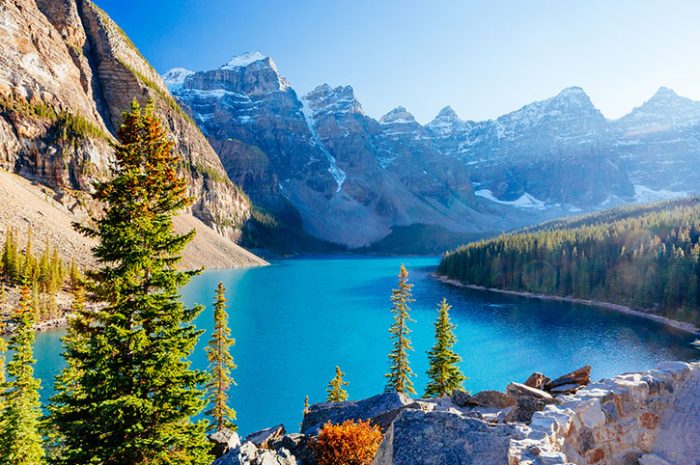 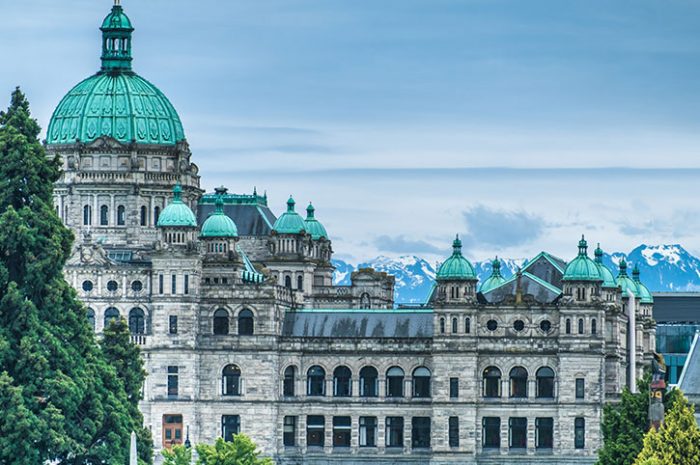 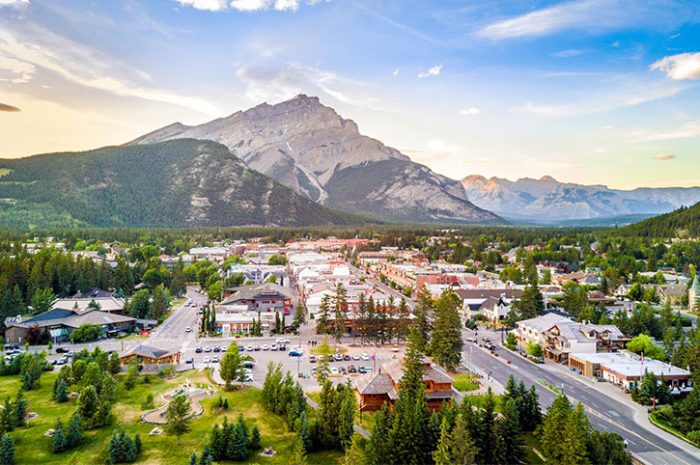 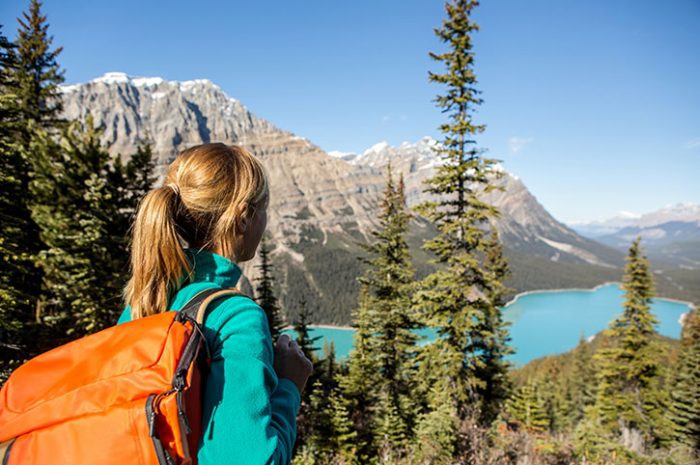 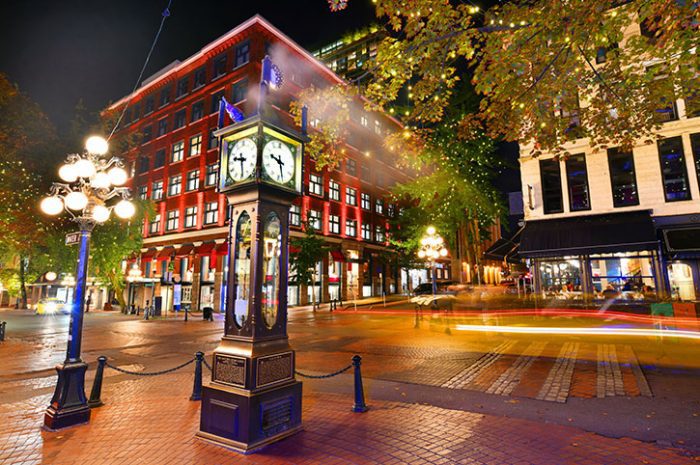 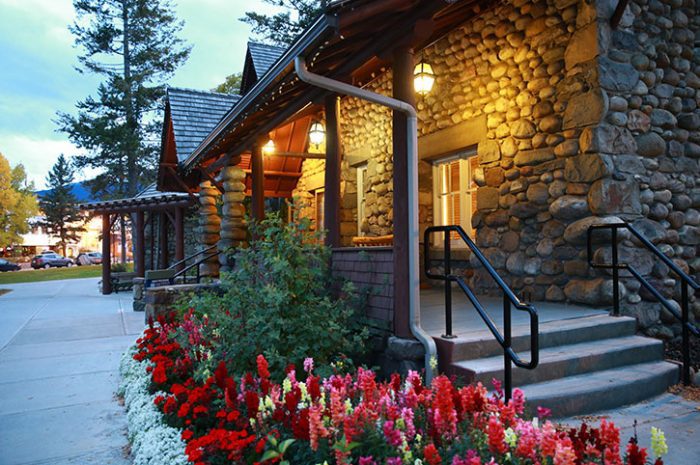 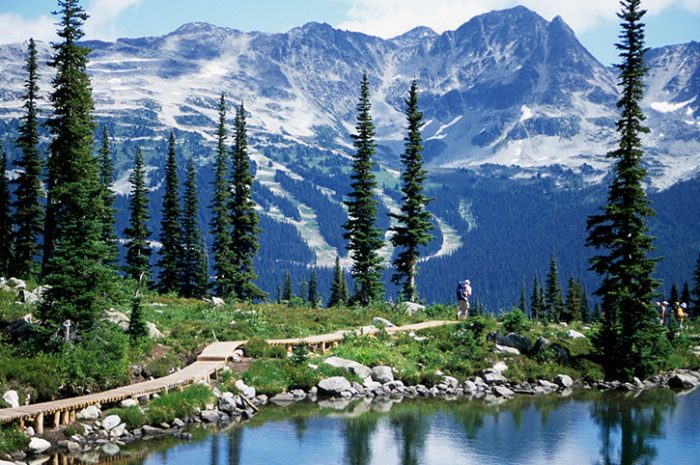 After exploring Vancouver and the delightful Victoria, travel high into the majestic Canadian Rockies, to visit spectacular National Parks and take a ride on a glacier.

Welcome to outdoorsy, nature loving Vancouver! Regarded as one of the world’s most naturally beautiful cities, Vancouver is framed by dramatic vistas on all sides and is the kind of place where, given its close proximity to nature, you can ski in the morning and swim in the ocean by early afternoon. After settling in to your hotel you’ll meet your Travel Director this afternoon, then you’re free to head out and uncover the city’s many delights. Take a stroll through Stanley Park, or alternatively explore Vancouver’s diverse culinary scene which boasts some of the best Asian cuisine in all of North America.

Start your day with a sightseeing tour of Vancouver, one of the world’s most naturally beautiful cities. Explore historic Gastown, the city’s oldest neighbourhood, designated a National Historical Site in 2009. At Stanley Park, view the famous collection of totem poles and enjoy lovely views from Prospect Point. Reach the coast and board the ferry for the crossing to Victoria.

Enjoy picturesque views of the many islands dotting the Strait of Georgia before docking at Swartz Bay. A short drive takes you into charming Victoria, the capital city of British Columbia. Your introductory sightseeing tour takes you along the waterfront district, past the Parliament Buildings and Government Street.

This morning, head for Butchart Gardens and start with an iconic breakfast at the Blue Poppy Restaurant with its conservatory atmosphere where light pours in through skylights and windows face the stunning gardens. Then, roam one of the world’s greatest floral displays in the amazing 55 acres (22ha) of flowers and show gardens.

The rest of the day is free to enjoy the many delights Victoria has to offer. Perhaps visit The Royal BC Museum, one of the finest in Canada. Consider whale watching as you cruise Victoria and the protected waters of Haro Strait and the Strait of Juan de Fuca.

Optional: Victoria Whale Watching
Board your vessel to enjoy a three-hour whale-watching expedition in the waters off Victoria. While it can’t be guaranteed in advance which of the abundant marine wildlife you’ll see on your journey, chances are you’ll also spot magnificent bald eagles, porpoises or seals. Spring and summer are the best times of the year to see the resident Orca whales in all their glory. Approx. duration: 3 hours.

Travel to Chemainus, a seaside community that is renowned for its Mural Project-a series of giant outdoor wall murals. Then, ride the ferry across the Georgia Strait back to the mainland in Horseshoe Bay. Travel along the Sea-to-Sky Highway offering stunning scenic ocean vistas of Howe Sound, soaring mountains, dramatic waterfalls and bustling communities. Stop at Shannon Falls Provincial Park to view the spectacular waterfalls, the third highest in the province of British Columbia. Arrive in the quaint alpine village of Whistler, co-host to the 2010 Winter Olympics.

Spend a full day at leisure in Whistler, nestled between the breathtaking Blackcomb and Whistler Mountains. Explore the village at your own pace and relax at one of the many outdoor venues; perhaps visit the excellent Squamish Lil’wat Cultural Centre, where the Squamish and Lil’wat people invite you to learn about the cultures of the First Nations of BC.

Join one of the many optional excursions, including ziplining, whitewater rafting or a thrilling ride aboard the Peak-to-Peak Gondola, as you glide along the world’s longest unsupported span. Other activities include flightseeing over the lakes and glaciated peaks of Garibaldi Provincial Park.

You’ll leave Whistler behind today as you venture along scenic Duffey Lake Road, spotting the freshwater fjord of Seton Lake, and the ominous sounding Mt. Rohr along the way. Following the once treacherous Cariboo Wagon Trail, which formed part of the Gold Rush Route, your final port of call for today is Sun Peaks, one of British Columbia’s best loved ski resorts.

Drive through white-fenced ranch lands and follow the Yellowhead Highway, catching a glimpse of the snowcapped Columbia Mountains in the distance. Keeping a firm eye on the snowcapped peaks of the Columbia Mountains in the distance, it will be cheers all round as you catch a first glimpse of Mount Robson, the most prominent mountain in the North American Rockies and the highest point in the Canadian range. Finally, you’ll finish up today in unpretentious, heart warming Jasper, which sits smack bang in the heart of one of the most beautiful protected wildernesses in the world.

Enjoy a full day at leisure in the largest National Park of the Canadian Rockies. The beauty of the area will leave you breathless. Optional activities abound-from a gentle float trip on the scenic Athabasca River, to a wilderness hike to view the glacier on Mount Edith Cavell, or a scenic cruise on Maligne Lake.

First, you will be heading to the impressive Icefields Parkway. A striking 232km stretch of road that cuts straight through the backbone of the Rockies, serving up ancient glaciers, mountain lakes and broad sweeping valleys en route. As you make your way down to the ‘Jewel of the Rockies’, the vibrant turquoise Lake Louise, you will make a short stop before heading on to explore the magnificent Columbia Icefield. Here, you’ll ride the giant Ice Explorer across the Athabasca Glacier for a closer look at this ancient marvel of nature, before coming to a stop in Banff.

Waking up today hopefully you’ll be full of energy, as the vast natural playground outside of your front door isn’t going to explore itself. Venture into the stunning wilderness of Banff National Park, or better still you could take advantage of our enticing range of optional activities to truly unlock this region in style.

It will be another incredible drive today as you climb higher and higher to cross the Continental Divide at Kicking Horse Pass, stopping at the Spiral Tunnels on the way to marvel at one of the steepest railroad stretches in the world. You’ll then travel through not one, not two, but three beautiful national parks, slowly descending from the mountains as the landscape changes from snowcapped peaks to sprawling wineries and fruit orchards, indicating that you’ve arrived in Canada’s ‘fruit basket’, the Okanagan Valley. Surrounded by so many grapes the temptation for a tasting will be hard to resist, so you’ll stop off at a local winery for a tour and tasting before heading on to Vernon, the unofficial capital of the Okanagan.

On your final drive of the trip make the most of the scenery this morning as you pass through the Cascade Mountains, named for the staggering number of waterfalls tumbling off the peaks, before venturing into the Fraser River Valley and finally coming to a stop back in Vancouver, the place where it all began.

Include this Escorted Tour in a holiday
designed for you

All prices are per person, based on 2 sharing a twin room, and include meals where shown. Please call Freedom Destinations to confirm departure dates and availability. Seasonal variations may apply. Itineraries may vary for tours departing from 1 April 2023 onwards. 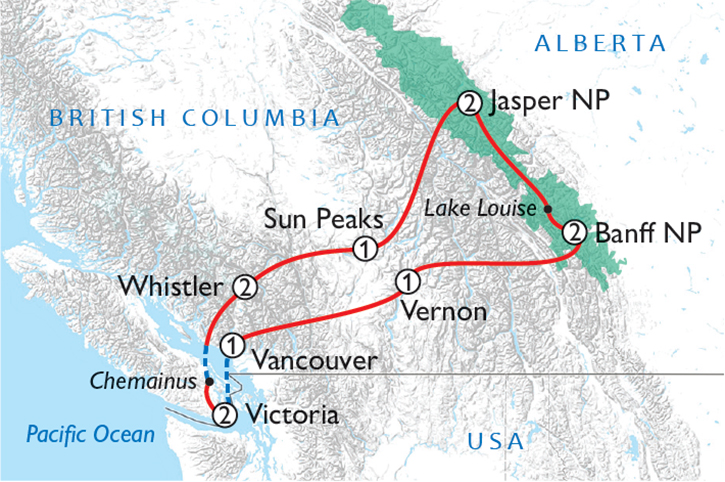 Enjoy first class touring with the company of others. Our experienced guides will make sure you don’t miss a thing.