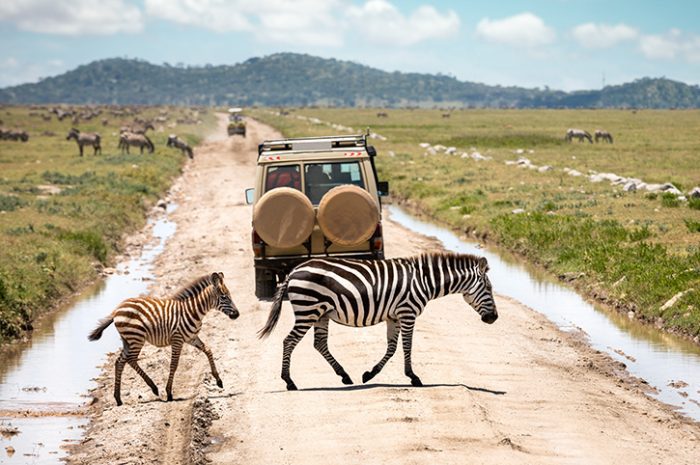 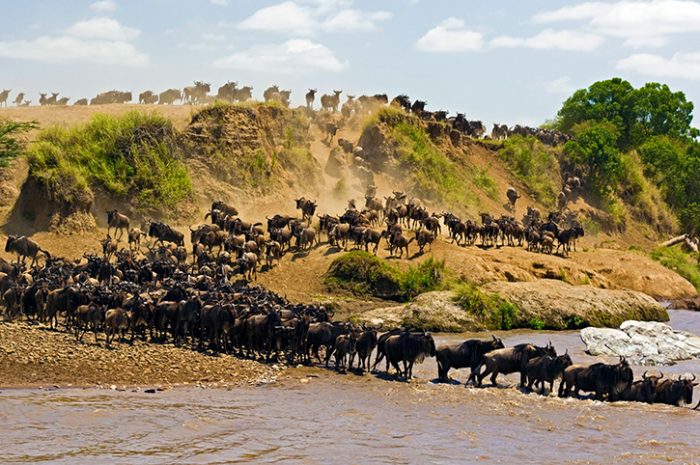 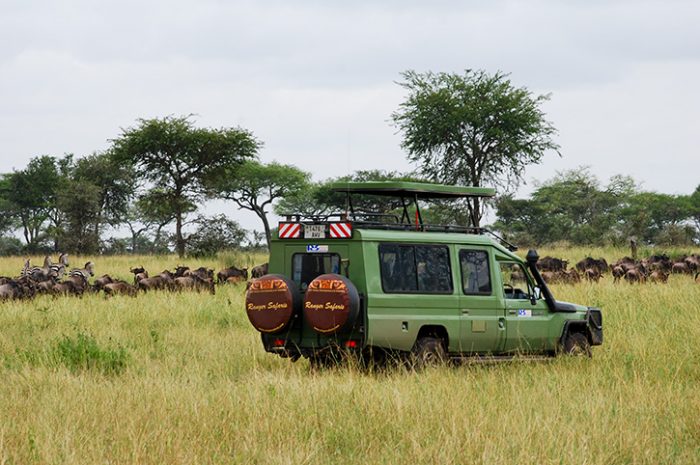 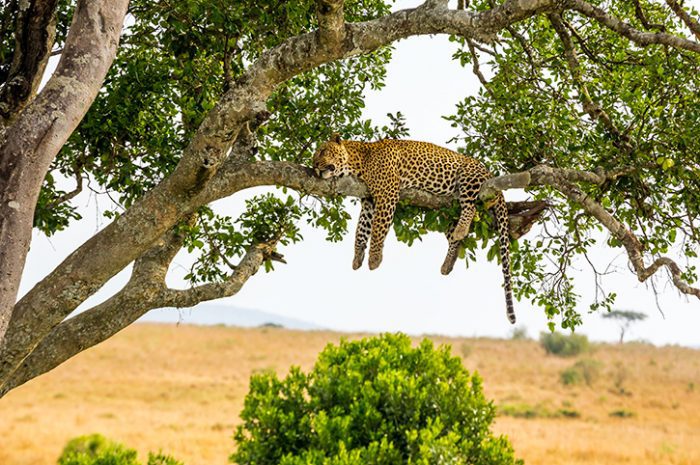 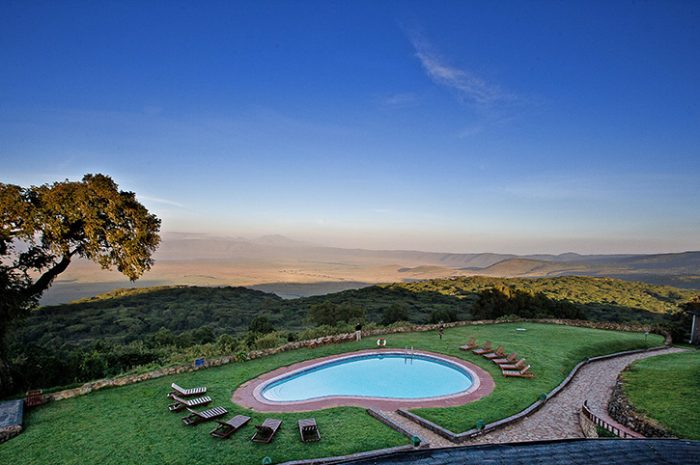 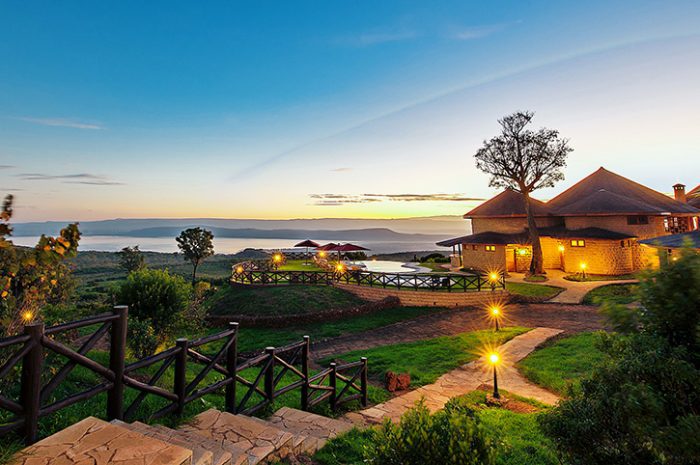 The perfect safari for those seeking cultural experiences, stunning landscapes and excellent game viewing across Kenya and Tanzania

Upon arrival into Nairobi, you will be met and transferred to your hotel for the afternoon at leisure.

Ole Sereni overlooks the landscapes of Nairobi National Park where you may be able to spot a variety of game from the hotel’s outdoor deck. Facilities include two restaurants, a pool, bar and a spa.

Travel through Kenya’s fertile highlands and down the Rift Escarpment to arrive at your lodge in time for lunch. Later there is an afternoon game drive returning to the lodge as the sun sets. The next day enjoy further opportunities for game spotting on morning and afternoon game drives with the option to book an early morning balloon safari. The park is famous for its zebra and wildebeest migration when the plains become covered with these herbivores enjoying the lush grasslands. Lion, leopard and cheetah are all present here too.

Mara Sopa Lodge: Located high on the slopes of the Oloolaimutia Hills, Sopa Lodge offers magnificent views across the eastern reaches of the Masai Mara. The lodge is set in expansive and mature wooded gardens and follows the design of traditional African round houses. Facilities include a lounge-bar with an inviting fire place and a swimming pool taking in the magnificent views.

Travel across the ‘bread basket’ of Kenya and into the Great Rift Valley on the way up to Lake Nakuru. Once in the park, take a game drive en route to the lodge which has splendid views overlooking the lake. Both black and white rhino are present in the park as well as the endangered Rothschild’s giraffe. Also keep an eye out for buffalo, leopard, zebra, eland, waterbuck and lion.

Lake Nakuru Sopa Lodge: Positioned on a range of hills marking the western edge of the Great Rift Valley, the lodge offers spectacular views over the park. Facilities include a swimming pool and restaurant all positioned to make the most of the views.

After breakfast continue to Lake Naivasha for a boat ride, before heading southwards to Amboseli. The park is known for its magnificent views of Mt Kilimanjaro, Africa’s highest mountain, as well as large herds of free ranging elephants which you will have the chance to see on tomorrow’s full day game drive.

Continue the journey to the Tanzania border and then on to Arusha in time for lunch. Later drive across the Masai Steppe and into the Great Rift Valley. Arrive at your lodge which is perched on the escarpment and  enjoys magnificent views overlooking the park.

Lake Manyara Kilimamoja Lodge: Nestled on the rim of the Great African Rift Valley with stunning views over Lake Manyara, the Lodge is set in charming landscaped gardens visited by over 130 species of birds. The rooms are decorated in elegant African style and have a private outdoor deck.

Please note that Serena Lodge may be used as an alternative which has equally stunning views.

After breakfast spend the morning driving through Lake Manyara National Park with its giant fig and mahogany trees. Look out for hippos, elephants, warthogs and the elusive leopard. Return to the lodge for lunch, before departing for the Serengeti National Park.

Serengeti Sopa Lodge: Overlooking the plains of the south-western Serengeti, Sopa Lodge has a prime position for exploring the park and its prolific game. The African inspired rooms have a verandah ideal for enjoying the views and watching the spectacular serengeti sunset.

Today morning and afternoon game drives will allow plenty of time to explore this world famous park. Sharing the same ecosystem as the Masai Mara in Kenya, the annual zebra and wildebeest migration moves in a constant cycle between the two borderless parks. The big cats are here in good number too including Cheetah who like the open grassy plains. It is possible to book an early morning balloon flight for that sublime experience of drifting above the park – ask you consultant for details.

After breakfast depart for Ngorongoro with a picnic lunch, viewing game as you head out of the Serengeti. Travel up through the lush greenery of the Crater Highlands with a stop at a Masai Village en route, before arriving late afternoon at your lodge.

Ngorongoro Sopa Lodge: Facing the often magnificent sunsets to the west, Ngorongoro Sopa Lodge is located 2,375 metres up on the eastern rim of the crater and enjoys unparalleled views across this enormous caldera. The rooms are themed around traditional circular houses with conical roofs and decorated with rich woodcarvings and sculptures.

A highlight awaits you this morning as you depart to explore what is commonly referred to as the World’s largest natural zoo. Descend through the early morning mists and 2,000 feet into what is the world’s largest intact volcanic caldera. Due to its size and diversity, the crater floor has distinct areas including forest, swamps, lakes and open grassland. It’s a fantastic wildlife experience with good chances of seeing a wide variety of game.

After breakfast travel through the highlands, passing coffee plantations on your way to Tarangire National Park. Enjoy a game drive en route to the lodge where  there will be time for lunch and maybe a swim, before an afternoon game drive. Tarangire is recognised as one of the best parks in northern Tanzania for elephant viewing, especially  during the dry season when large herds are attracted to the permanent water source of the Tarangire River. You will also see the many baobab trees to be found in the park.

Tarangire Sopa Lodge: Built to blend in with its surroundings, Tarangire Sopa Lodge lies hidden amongst the kopjes, ancient baobabs and grasslands of the park. Numerous elephants can often be seen around the lodge, allowing visitors a close encounter. The comfortable rooms are housed in buildings with conical roofs and there is an outdoor pool to cool off in on those hot afternoons.

Today head back to Nairobi, stopping in Arusha for lunch. Enjoy dinner in Nairobi, before being dropped off at the airport or hotel.

Include this Safari in an Africa holiday
designed for you

Prices are per person based on 2 sharing and include en suite accommodation, game drives and meals as stated. 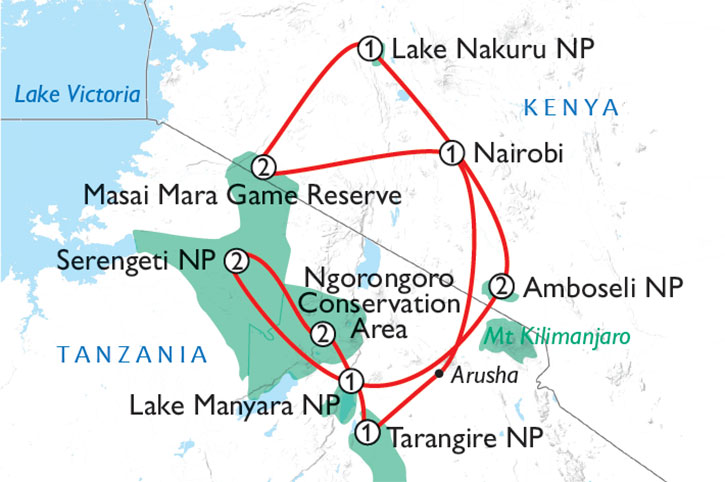 Discover amazing wildlife and sample the local culture on a real African adventure.

Safari departs on Tuesdays and Thursdays.