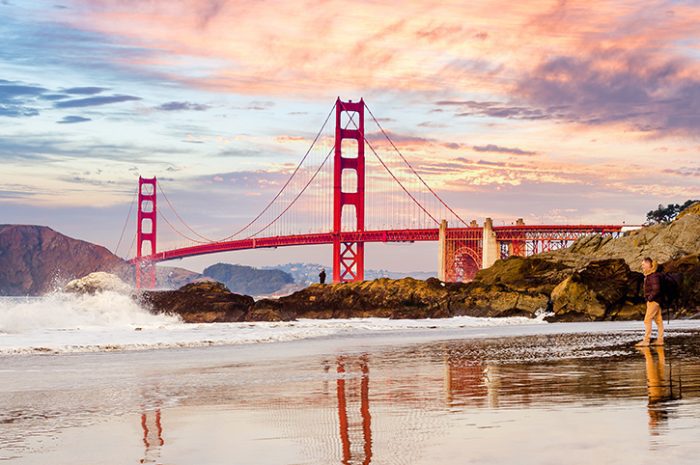 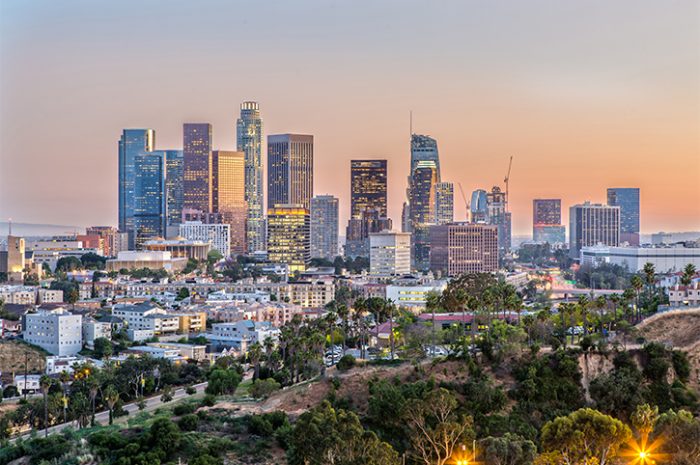 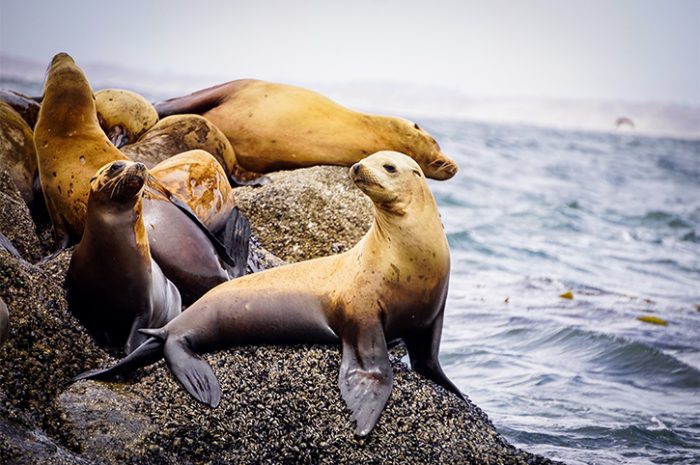 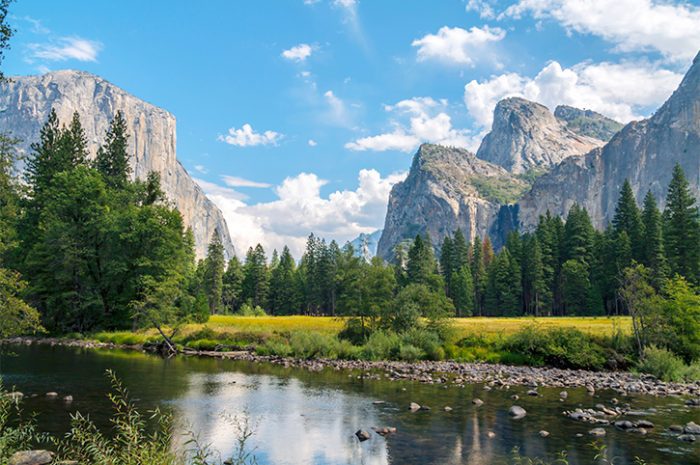 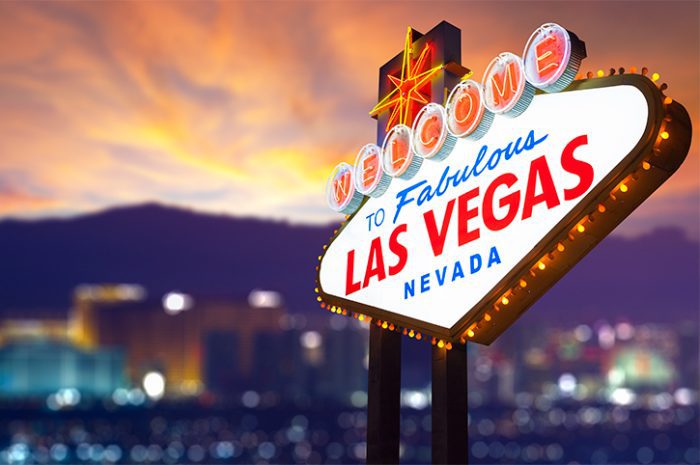 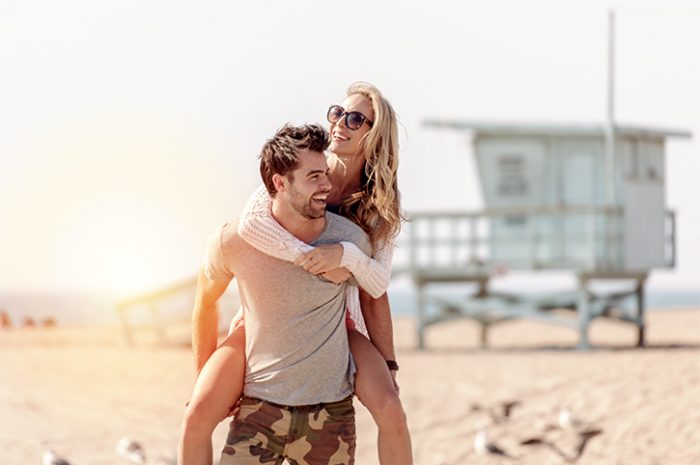 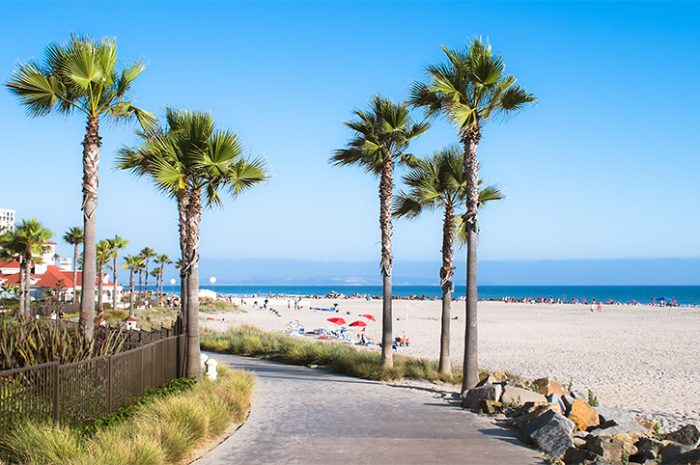 Journey from the glamour of Los Angeles, through the beautiful cities of California’s west coast, for a bit of nature in Yosemite National Park and into the glitz of Las Vegas. Once you’ve seen it, you’re going to want to stay!

Arrive at Los Angeles Airport, collect your hire car and proceed to your hotel in Hollywood. Los Angeles is the entertainment capital of the United States, home to famous movie stars and the infamous landmark, the Hollywood sign, it is a city brimming with culture and happenings. This big metropolis has many regions with distinct flavours and communities.

Today, explore the City of Angels. Visit the glitz and glamour of Hollywood; take a stroll along the Walk of Fame and see the names of celebrities commemorated in pink stars along the sidewalk, visit Mann’s Chinese Theatre, the best-preserved of the movie palaces from Hollywood’s golden era, and take a drive through Beverly Hills, the most famous neighbourhood in the United States. If movie making is what you fancy, visit Universal Studios, you can tour the sets and cast yourself in the thrilling rides, shows and attractions that bring the movies to life. In the evening, enjoy Universal City Walk, filled with restaurants and nightclubs.

Depart Los Angeles this morning and drive up the coast toward Santa Barbara. On the beautiful Pacific Coast, Santa Barbara is a gem, here you can stroll through the Santa Barbara Botanic Gardens, embark on a scenic nature trail in Los Padres National Forest or simply head for one of the soft sand beaches. When it’s time to dine, fresh seafood can be found in the restaurants on Stearn’s Wharf.

Standard Hotel: Inn by the Harbor or similar

Continue the luxurious drive up the Pacific Coast toward Monterey. Consider taking the famously scenic 17-Mile drive up the coast. Discover Nature’s treasures as you pass through the serene majesty of Del Monte Forest and for a gourmet picnic lunch, visit Pebble Beach Market adjacent to The Lodge at Pebble Beach. Best picnic spots are between Point Joe and Seal Rock and you’ll find picnic tables at many stops. After being swept away by the stunning Pacific coast views, spend the afternoon enjoying Monterey.

Home of majestic Wine Country and the Golden Gate Bridge San Francisco is the next stop on this self-drive adventure. Rows of elegant houses, the famous cable cars, clusters of ethnic neighbourhoods, and the colourful waterfront all add to the distinctive international flavour of the city. Today, you are free to enjoy one of the many sights and sounds of San Francisco.

There is more time today to continue exploring San Francisco’s many sights; take a cable car ride from Fisherman’s Wharf, visit the famous Alcatraz Island or spend some time in Golden Gate Park. This evening, dine in one of San Francisco’s many distinctive neighbourhoods; from Chinatown to the very Italian flavoured North Beach, each offers its own distinctive culture and cuisine.

OPTIONAL EXPERIENCES – Golden Gate Bike tour
After a proper bike fitting the tour begins along the San Francisco waterfront past Aquatic Park, Fort Mason, the Marina, and the Presidio, through Crissy Field and to Fort Point. Riders cross the Golden Gate Bridge on wide bike path, then through the Vista Point to Old Fort Baker. The tour ends in Sausalito where riders can enjoy the shops, the many art galleries, and the delicious food. You then have the option to keep the bike until closing hours enjoying an additional adventure ‘biking the bay’!

Leave the hustle of San Francisco behind, and head to the striking beauty of Yosemite National Park. Gaze upon the parks iconic sequoia trees, granite cliffs of El Capitan and Half Dome and the iconic vista of towering Bridalveil Fall from Tunnel View.

OPTIONAL EXPERIENCES – Yosemite Valley Floor Tour
On this two-hour tour, Rangers introduce some of Yosemite’s most famous sightseeing points in Yosemite Valley and describe the history, geology, plant and animal life of the region. This year-round Yosemite Valley Floor tour provides a fuller knowledge and enjoyment of the park. Open-air trams operate from late Spring through early Fall. Late October through April, ride in an enclosed and heated motor coach with large windows allowing unimpeded views of Yosemite’s famous sights. Bring your camera along for postcard-perfect pictures.

Take a drive through Yosemite before leaving the park towards Bakersfield. On route enjoy a visit to the Sequoia and Kings Canyon National Parks. These twin parks hold monuments to nature’s size, beauty, and diversity. Immense mountains, rugged foothills, deep canyons, vast caverns and the world’s largest trees all reside here making it a unique place. Continue to Bakersfield for an overnight stay.

Today is a long day so an early start is a good idea. Drive toward Nevada through Death Valley National Park, here you will find raw and barren earth as carved by the elements. The visitor centre is located at Furnace Creek and will be a good starting point for seeing the park. You will be reaching Las Vegas in the evening, it’s ok though, this is a city that never sleeps! For a taste of this spectacular city, simply take a stroll down Las Vegas Boulevard, also known as ‘the strip’.

Today you have the choice to explore this electric city, or you might choose to take a helicopter tour to the Grand Canyon for a glimpse at one of the great natural wonders of the world. In Vegas, each hotel and casino has a distinctly different theme and all offer wondrous displays. For a different side of Vegas, visit Fremont Street, this historic street features shops, restaurants and the oldest casinos in Vegas.

Drive away from the glitz of Las Vegas this morning toward the lovely town of San Diego home to SeaWorld® Adventure Park and the San Diego Zoo. These world-class attractions feature a variety of spectacular sights and activities. A variety of animal-themed shows are featured here and it’s even possible to take a behind the scenes tour.

Before you leave San Diego, you may want to visit Old Town San Diego State Historic Park for a taste of history and tradition. Even today, life moves slowest in this part of San Diego, where the hustle and bustle balances with history and fiestas. Visitors are offered a glimpse into yesteryear, as converging cultures transformed San Diego from a Mexican pueblo (small Town) to an American settlement. Continue on when you’re ready to Santa Monica where you will enjoy a two-night stay.

Both a seaside town and bustling city, Santa Monica has activities for both young and old, from beach games and bike paths to art galleries and nightclubs. Santa Monica’s cultural offerings run the gamut, with over 75 museums and art galleries within the walkable 8.3 square mile city limits. Swimming, surfing, volleyball, skating and biking are among the favourite beach-side pastimes of this area. In the evening, countless dining experiences are available; Santa Monica is the reputed birthplace of ‘California’ and ‘fusion’ cuisine which is marked by an artistic blending of culinary styles and the freshest of organic ingredients.

Depart Santa Monica at your leisure to drop off your hire car and make your way to the airport for your flight home or onwards to the next destination.

Price is per person, based on 2 sharing a double or twin room and includes pre-booked accommodation, air-conditioned car and unlimited mileage. One-way fees charged locally. Hotels specified are subject to availability and may be substituted by one of a similar or higher standard. Itineraries may vary for tours departing from 1st April 2021 onwards. 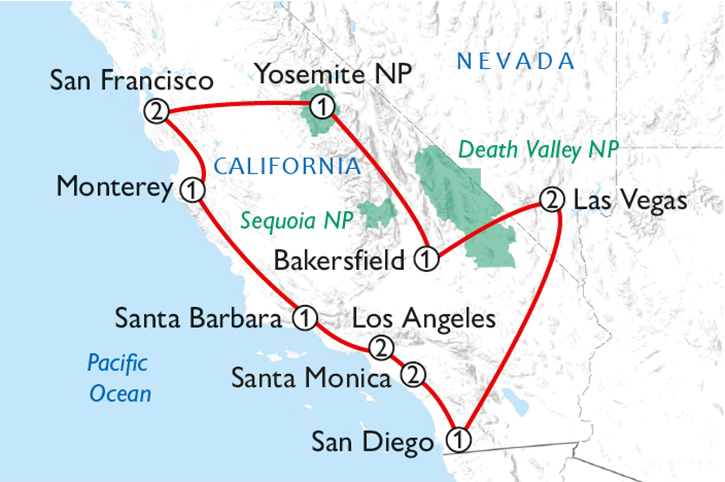