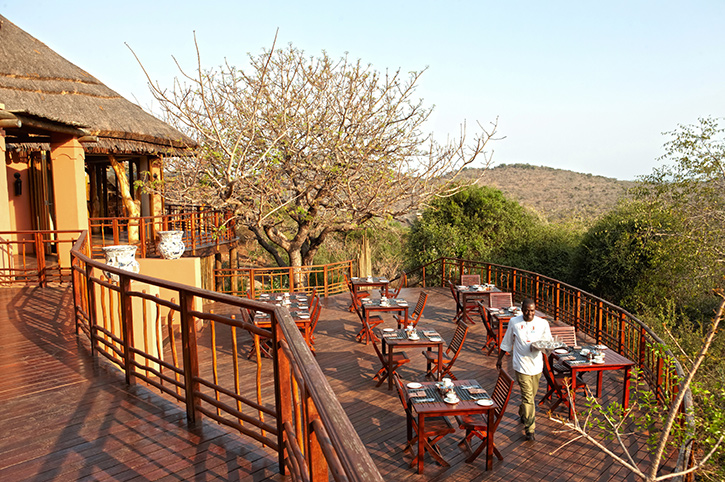 To travel is to discover the culture of a new country, to mix with its inhabitants and its landscapes, and to sample its unique gastronomy. These 5 traditional meals provide the perfect opportunity for travellers to taste the many flavours of wilderness and bush food on safari in Africa.

When you travel to countries such as South Africa, Namibia and Botswana, many foods originate from The Netherlands, France, India and Malaysia, but the varying climate and agriculture across the whole continent of Africa means that a large variety of local meat, fruit and vegetables are available to provide flavourful quirks to the region’s cuisine. Although you are guaranteed to see beautiful landscapes and wild animals up close, prepare to be amazed by the food on offer, too – even when you’re deep in the bush!

Barbecues are a big part of African culture. On a trip around the continent, travellers will find bush meats and meat slabs coated with sauces such as caramel and hot sauce. Bush animals come in the form of steaks, carpaccio or stews cooked in traditional pots – there is a wide variety of dishes on offer for the intrepid adventurer to feast on.

In South Africa they use the Afrikaan word ‘Braii’, for their barbecues, and it’s an important cultural counterpoint; the country’s national Braii day on the 24th September, where locals celebrate the country’s cultural heritage as they spend the day with loved ones, eating food cooked on the Braii, of course.

You may also like our How To Safari Guide.

The ostrich is native to several African countries and is widely available across the continent. A lean meat, mostly unfamiliar to a European audience beyond pricey street-food markets, ostrich meat is a great alternative to beef and is arguably healthier too, being both low in cholesterol and high in iron.

Travellers may come across ostrich in carpaccio or steak form in safari restaurants with burgers made from the meat a firm favourite of both locals and travellers. But, thanks to its lean nature, ostrich can be difficult to cook. The meat can easily dry out as there is little fat to fall back on so it’s common to marinade the meat prior to cooking to give it some extra kick – and a great taste.

Ostrich eggs are also often found on the menu. These birds are very protective of their eggs and both the males and females takes turns to protect and incubate before hatching. They are delicious in taste and are roughly 25 times the size of a chicken egg, meaning they make for a great meal!

One thing to note, though, is that unlike boiling a chicken egg – which takes roughly 6 minutes – the ostrich egg takes an almighty two hours to even hard boil. A simple bash of the spoon to break the shell is also off the cards. You will need a saw or drill to break the shell as they are incredibly strong and heat resistant.

Away from the scales, sharp teeth and claws, crocodile meat is tender and delicious. The saying, “it tastes like chicken” is often thrown around when people discuss it, but the reality is, it’s true!

Crocodile is a white meat that can be served in steaks, stews or on skewers, which is how you’re likely to find it on safari. The majority of the animal can be eaten, with the tail and legs said to be some of the tastiest parts. One phrase you might see is ‘crocodile wings’, which refers to the animal’s feet and these taste similar to frog’s legs – for safari adventurers who have also travelled a little closer to home. The meat is best eaten fresh to keep its taste and texture and the unique flavour means that unlike ostrich, very little marinade is introduced into its recipes.

Biltong is probably the most famous traditional South African snack.

Made from various types of dried cured meats, biltong was originally cured to preserve the meat for long trips when explorers were discovering the African continent in the seventeenth century. Despite being made from the game animals you’ll find on the menu in safari restaurants, this dish was never intended as bush meat, but rather as sustenance for travellers.

Often made from meats in the form of beef, ostrich, springbok, kudu or gemsbok, the key here is that the preservation of the meal relies on salt, vinegar and brine to cure the meat and kill the bacteria. The process is simple but takes time as the meat is soaked in vinegar for a day, then salted and covered with spices including coriander, black pepper and other seeds.

It has now become a traditional recipe and is found all over the country as well as across the globe. Not only is it used as a snack but also as meat in many dishes such as pizza, pasta or salad. Be sure to try it if you’re on safari in South Africa.

Antelopes are plentiful on the planes and the sheer number of different types of species means that when sampling their meats, there’s a lot of choice on offer. Here’s a handy run-down of some of the most interesting – and tastiest – to look out for when on safari.

You’ve definitely seen or heard of Pumba – the warthog from the Lion King. If you make it to Zimbabwe or South Africa you will find warthog – or, Pumba, which is what the locals call it on the menu.

Warthog is, unsurprisingly, not dissimilar to pork. Like other game meats, it is lean and extremely tender, whilst the tastiest part of the animal is said to be the ribs, so it’s common to find hot sauce slathered on top, done prior to or post roasting, but always adding heaps of flavour.

The meat is often marinated for a number of days before being cooked. Travellers on safari may also find warthog on a spitbraii where the pig is roasted over a fire and shared amongst friends at social gatherings.

Use the Locals as Your Guide

When on holiday, it’s always tempting to choose safe food, falling back on old favourites to ensure that you don’t end up hating what’s put in front of you. This is especially true on safari holidays and trips to cultures which are already very different to your own. The problem is that you end up missing out on the best discoveries – and if you’re on safari, the chances are you’ve come for adventure in the first place!

So don’t be afraid to let the locals surprise your taste buds and recommend to you the best gastronomic treats the region has to offer. Although safari food can often be simple, it is always well served and bursting with all sorts of flavours. Even if you are on a mobile safari with temporary camps, expect your plate to be filled with large portions of succulent tasty food and surprises, such as freshly baked bread cooked in creative bush kitchens.

A safari holiday is a great opportunity to discover the flora, fauna and landscapes of Africa but don’t underestimate the power of food and the way it draws locals and tourists together in stunning settings. Cuisine is just as big a part of a country’s culture as the local wildlife and people, so dig in and find out what life in the African wilderness is really like!

Start planning your safari holiday with guidance from an Africa Expert who has visited the places we talk about in this article. Use our free planning service to get in touch today.