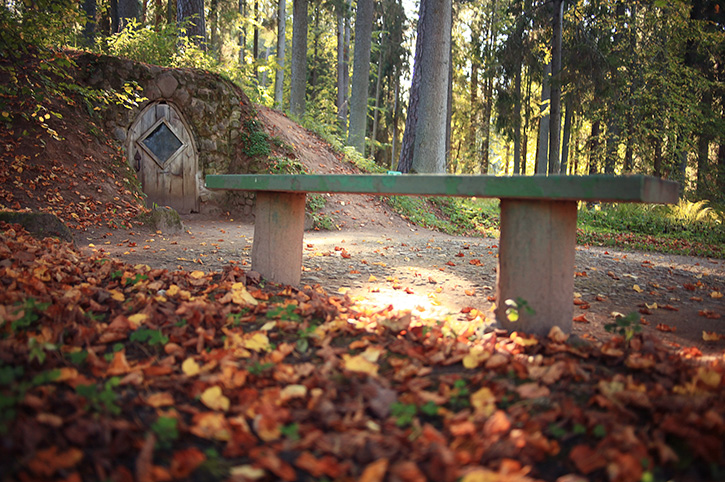 New Zealand is one of the most beautiful countries in the world and, as such, it’s no surprise that its mystical and marvellous landscapes have provided the backdrop for many a Hollywood movie.

New Zealand’s North and South islands have both played host to film crews and Silver Screen stars over the years, with directors and artistic executives choosing an array of locations to bring their scripts to life. For film buffs, there’s nothing better than laying eyes on scenery only previously seen on screen in real life.

Movie experiences and tours afford visitors the chance to follow in the footsteps of their favourite characters and get a deeper insight into how the films were made and how the directors used their creativity, combined with technology, to showcase the chosen locations in all their glory.

A Hobbiton movie set tour is an itinerary essential for fans of the Hobbit films and The Lord of Rings trilogy. This is a full-day tour departing from the centre of Auckland and is a wonderful, once in a lifetime experience.

It involves an extensive exploration of the iconic Shire used in the film adaptation of the much-loved tale. During the day, visitors will be treated to a guided tour of the shire, covering all 44 hobbit holes.

Film lovers will have the chance to pose for photographs in front of the famous hobbit houses and enjoy a drink at the Green Dragon pub, which has been decorated in keeping with the set. 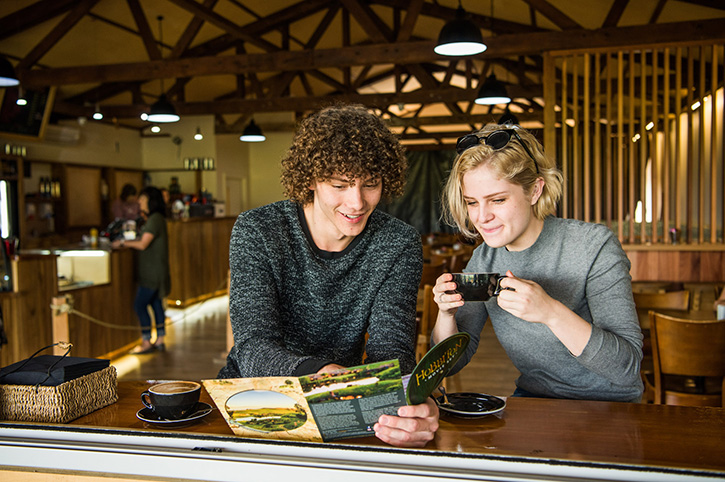 If you are not staying nearby, you can even upgrade this day tour, choosing to travel from Auckland, where visitors have the chance to take in stunning views of the Bombay Hills before touching down at Shire’s Rest in the very heart of the countryside of Waikato.

After a guided tour of the main attractions, guests will then be able to meander at leisure, take photographs or really get a feel for the set. The level of attention to detail is staggering and it’s well worth taking the time to appreciate every touch. Tour guides are well-versed in the history of the site and they’ll be happy to answer questions.

The Hobbiton movie set tour includes lunch and return transport to Rotorua, or Auckland if you choose to upgrade. Organised Hobbiton tours are a great way to explore the ins and outs of the fictional town, find out all about what happened during filming and discover everything you could ever possibly wish to know about how the set came to be such an iconic part of New Zealand’s film history.

As well as being a much-loved filming location, Hobbiton is also amazingly picturesque and there’s no better place to be on a bright, sunny day.

Enjoy a Hobbiton Day Tour from Rotorua or Auckland.

2. Lord of the Rings Tour

The Lord of the Rings is one of the most special and precious literary offings in history and it’s not just the films, but the books too have shaped many a childhood over the years. For fans of Tolkien’s classic works, there’s no better place to be than New Zealand, though that’s obviously truer for fans of the films.

The sheer scale and majesty of the landscapes lends to the drama of the tale and Peter Jackson couldn’t have done a better job in choosing locations to complement the epic, extraordinary story. 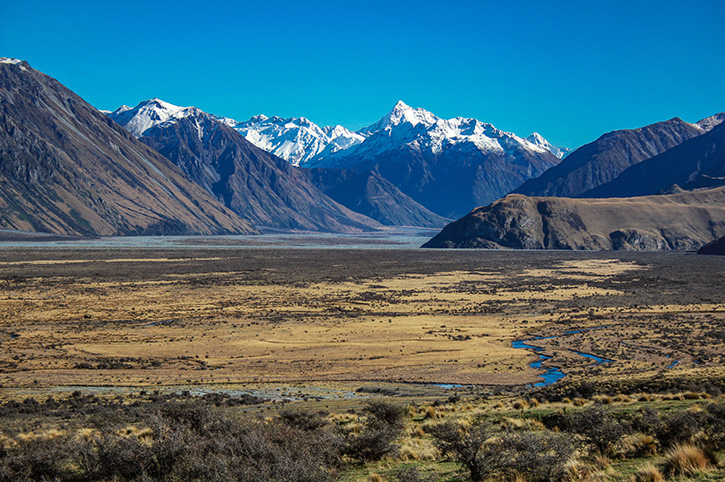 The tour to Edoras affords visitors the chance to follow in the footsteps of Aragorn, Legolas and Gandalf as they journeyed to the hilltop city of Edoras. Departing from Christchurch, the tour takes visitors to the Mount Potts region, where they will set eyes on the beautiful Mt Sunday.

This is the mountain that most people will be familiar with as the city of Edoras. Perched up high, it’s possible to see the Misty Mountains in the distance and to look down on the mountain-framed meadows of Rohan.

This is an area that will bring back snippets from the film for Lord of the Rings enthusiasts, but it’s also a region of outstanding natural beauty. From this point, which boasts an enviable lofty position, it’s possible to see everything from ice-capped peaks and crystal clear lakes to bright blue rivers and verdant glades.

Take a moment to revel in the tranquility and take in the views from every angle. Full commentary will be provided on the journey.

After visiting Mount Sunday, visitors will also have the chance to see Mount Somers, the Rakaia Gorge and Lake Clearwater. There’s also an opportunity to take photographs of the backdrop and to see behind the scenes shots taken while building the set and during filming.

Staying in Wellington? Try our Lord of the Rings and Weta Cave Tour.

For those who are avid fans of the Hobbit, there’s only one thing better than a Hobbiton movie set tour, and that’s the chance to stay near the set. A Hobbiton Farm Stay gives film fans the chance to not only explore the set, but also to stay nearby in the rolling green meadows of the Hamilton-Waikato region. 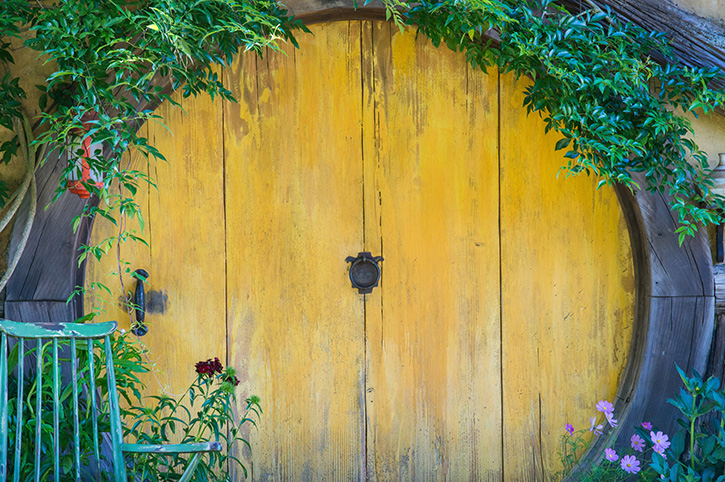 The tour is divided into two parts. The first stage involves travelling to Matamata from Auckland. This two-hour drive affords visitors the chance to admire the beautiful rural scenery and prosperous farmland of Waikato.

On arrival at the Hobbiton movie set, visitors will be taken on a two-hour guided tour, which is packed with information about the films, the cast and of course, the location.

The tour takes in the best bits of the 12-acre site and visitors can stop for photographs outside the famous hobbit holes. The tour covers all 44 hobbit holes and there’s also a window available for exploring at leisure and taking those all-important shots for Instagram. Afterwards, guests can relax with a drink at the charming Green Dragon.

The second phase of the tour involves an overnight farm stay at a local rural idyll – with breakfast and dinner provided. This tour offers a unique opportunity to walk around an impressive set as well as explore more of this beautiful region. It also provides the chance to sample and enjoy traditional Kiwi hospitality and a warm welcome is always guaranteed.

Choose the Hobbiton Farm Stay for your North Island Holiday.

For those who have seen The Lord of the Rings films, it’s difficult to imagine a more perfect representation of Mount Doom than the focal point of Tongariro National Park, Mount Ngauruhoe.

From hundreds of metres away, the imposing peak and distinctive conical shape comes into the field of vision, and the impact is instant. There’s something magical about this area, especially when you’re a movie aficionado.

Whether it’s a clear, bright day, or the summit is clouded in mist or fog, it’s possible to appreciate the magnitude of this natural marvel and the role it played in encapsulating Tolkien’s dark, oppressive realm of Mordor. 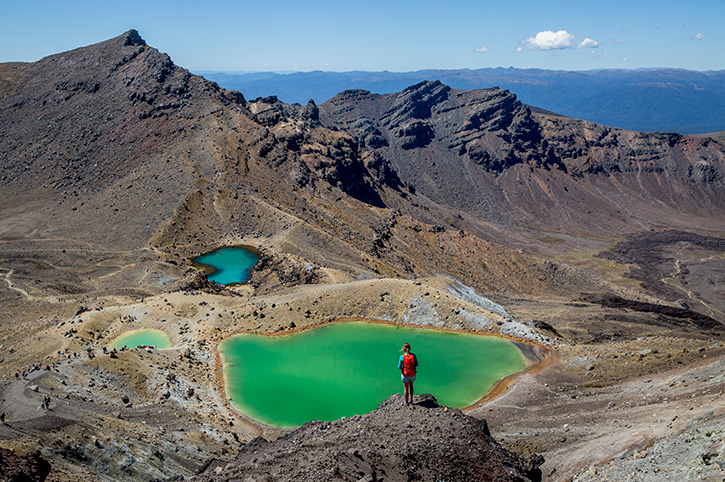 It is possible to conquer Mount Doom, but this is no easy feat. To achieve this goal, visitors must tackle the Tongariro Alpine Crossing. Widely regarded as one the best hikes in New Zealand, this 18.5km trek traverses the summits of Mount Ngauruhoe and Mount Tongariro.

It’s not for the faint-hearted but the experience and the views are well worth the metaphorical blood, sweat, and tears. For those keen to enjoy a more sedate adventure, it’s also possible to take in incredible vistas of this iconic, imposing mass from the ground rather than taking on nature.

Challenge yourself on our 3 day explorer of the Tongariro Crossing.

5. The Ultimate Movie Tour – Safari of the Scenes

The Safari of the Scenes tour, which departs from Queenstown, is a must for any movie fan. This epic journey of discovery covers locations featured in Lord of the Rings and the Hobbit, as well as X-Men and The Chronicles of Narnia.

The half-day trip takes visitors on a journey from the bustling town of Queenstown to Glenorchy, the heart of Middle Earth. Watching from the windows of a 4WD vehicle, it’s not hard to see why Peter Jackson chose this rugged spot as the backdrop for his vision of the mysterious lands created by JRR Tolkien.

From Glenorchy, the trip continues along the Dart River to the location chosen for Isengard, home of the Elves. From here, it’s possible to enjoy spectacular views of Mount Earnslaw and to marvel upon the blanket of verdant trees used to represent the Forest of Lothlorien.

It might also be possible to catch a glimpse of the peaks of the Southern Alps, which Jackson used for scenes set in the Misty Mountains. 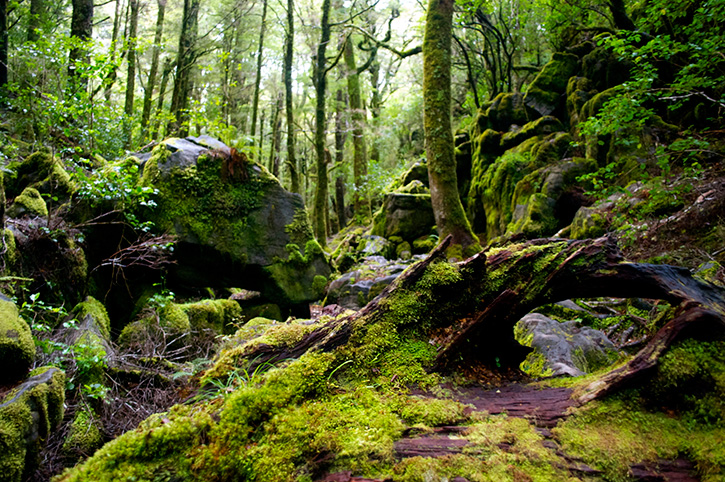 A half-day tour is the perfect opportunity to see some of the most iconic locations from The Lord of the Rings trilogy as well as the Hobbit, and visitors will also be pointed towards scenery that appears in other blockbuster films they might have seen too.

Travelling with a tour guide also affords visitors the opportunity to appreciate the views in their full splendour in addition to finding out all about why the locations were chosen and how they came to star in Silver Screen hits.

Tours also give visitors the chance to bond with fellow film fanatics and to relive and recreate their favourite movie scenes. There are plenty of stops along the way for those keen to take snaps. Don’t miss out. Book your Safari of the Scenes Tour in advance.

New Zealand is home to some of the most mesmerising and dramatic scenery on the planet and it’s no wonder that many a director has chosen its rugged landscapes as the backdrop for their movies.

For film fans, especially those of The Hobbit and The Lord of the Rings, there are some truly magnificent tours on offer and the chance to follow in the footsteps of heroes and heroines and see where the magic happened.

If you’re a film fan, include these top five movie tours, and more, on an epic New Zealand Self Drive Holiday.