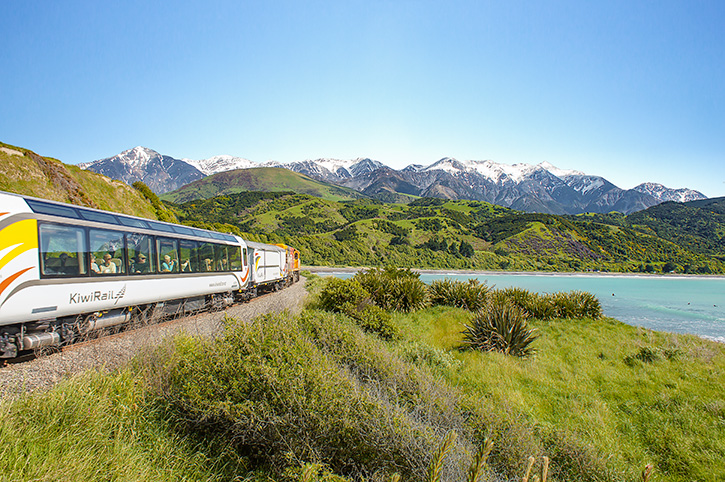 Having been destroyed in 2016, the Coastal Pacific train line in New Zeleand is set to re-launch in the coming months, to the delight of our New Zealand Experts and New Zealand customers. Read on to discover more about the route and how you can include it in your holiday to New Zealand.

New Zealand is a country that lends itself to touring and exploring. Visitors who are lucky enough to touch down on the shores of either the North or South Island often come equipped with a to-do list, which involves travelling around and ticking off some of the most spectacular attractions and natural wonders on the planet.

Although driving is a very popular method of transport among tourists in New Zealand – offering spectacular scenery from the windows and the chance for self-drive holidays – there are other ways of getting from A to B.

Visitors can enjoy some truly epic rail journeys and cruises, and especially for those keen to discover the beauty of the South Island, a trip on the Coastal Pacific train comes highly recommended.

The Coastal Pacific train line is set to re-launch in the coming months, providing tourists with the opportunity to travel from Picton to Christchurch, taking in magnificent views and stopping off at some incredible spots along the way.

The Re-launch of the Coastal Pacific

The Coastal Pacific railway line is one of the most iconic routes in New Zealand. Stretching from Picton to Christchurch, the track takes in scintillating vistas of the rugged coastline that forms the eastern edge of the South Island.

Sadly, in November 2016, the line was damaged extensively by an earthquake, which hit the popular seaside town of Kaikoura. Since then, work has been underway to restore the track, and now, KiwiRail has confirmed that trains will be up and running by the end of the year.

The Coastal Pacific train is set to launch again on December 1st.

The earthquake, which measured 7.6 on the Richter scale, wiped out much of the State Highway 1 and the surrounding rail tracks. At the time, it was uncertain whether it would be possible to even re-open the rail route, such was the impact of the quake.

However, after many months of work, which involved clearing the site and dealing with rubble caused by landslides before reconstructing the infrastructure, visitors to New Zealand can look forward to enjoying a ride on this iconic line once again.

You may also like The Most Iconic Rail Journeys in New Zeleand.

The Coastal Pacific train has well and truly earned its reputation as one of the most picturesque and scenic rail journeys in the world. Flanked by a rugged coastline that overlooks the ocean waves on one side and striking views of the Kaikoura Ranges on the other, this is a marvellous trip.

The train departs from Christchurch early in the morning and the journey to Picton takes around 5 hours. Many people choose to break up the trip, stopping off at the plethora of points of interest along the way. 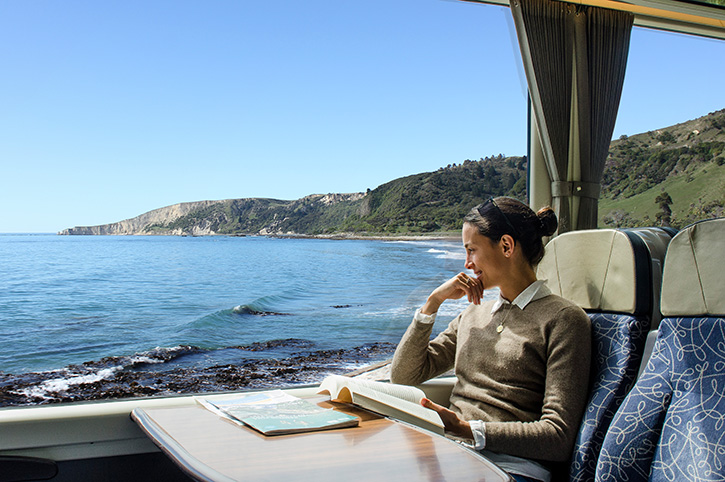 From the charming city of Christchurch, the train heads north, treating visitors to views of rolling meadows as it ambles through the Canterbury countryside and passes the vibrant vineyards of the famous Rangiora and Waipara winelands.

Making for the east, the train then starts its ascent up the coast, and passengers are afforded beautiful views of the Pacific Ocean. From the seaside town of Oaro, the train continues north, meandering along the coastal path with nothing but cliffs and waves for company.

Inland, the peaks of the Kaikoura Ranges dominate the horizon, as the line weaves in and out of rocky inlets and secluded bays. As late morning approaches, the New Zealand Railways gem reaches Kaikoura, which is famed for its abundance of marine life in a quaint and welcoming setting.

From there the train pushes on to the north, crossing lush grasslands along the way. While the mountains come ever closer, the ridges and summits can start to be seen on both sides of the track, and the peaks then converge near Hapaku.

One of the highlights of the journey is reaching Mangamaunu, where visitors can enjoy breathtaking views of the mountains surrounding the bay.

The line then crosses the border into Marlborough, a famous wine-producing area, which is scattered with vineyards. The climate here is much warmer and more temperate than further south, and the vivid green of the grass is replaced by earthy shades of brown and orange.

As the train moves through the salt plains near Lake Grassmere, look out for a pink hue that tinges the ground.

Before reaching the port of Picton in time for lunch, the Coastal Pacific train trundles past the pretty town of Blenheim.

The Picton to Christchurch train covers some of the South Island’s most beautiful terrain and it’s well worth exploring further. Stop off along the way to make the most of your trip, as highlights here include: 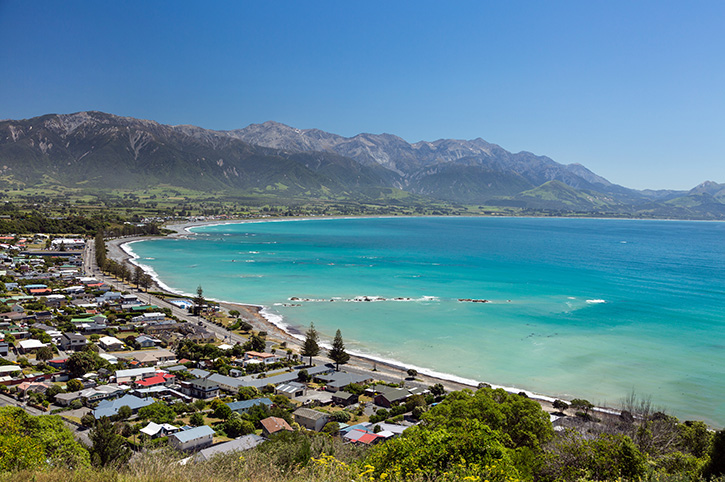 Kaikoura is a popular spot for tourists, especially those who have an interest in marine life.

It is renowned for offering incredible whale-watching opportunities, in addition to the chance to spot seals, sea birds, and dolphins. Most commonly, sperm whales are spotted in the local waters, but it is also possible to catch a glimpse of orcas and Southern Right whales.

There are tours available and boats are kitted out with the latest technology to track whales and other marine life, maximising the chances of a successful voyage. It’s very common to be able to spot whales flipping in and out of the water and to see their tails thundering through the tranquil surface of the ocean waters.

Many people are also fortunate enough to see pods of dolphins and birds like albatrosses spreading their wings over the sea.

The main attraction, though – those whales – can be spotted in the water throughout the year, but the best time to see certain species – including humpback whales, orcas and blue whales – is between June and August.

At this time of year, these whale species migrate from the cold waters of the Antarctic to the warmer climes of the waters surrounding Australia and Tonga.

Located in the heart of the Marlborough region, Blenheim is an excellent place to sample New Zealand’s famous wines. Boasting a pleasant climate and plenty of sunshine, this town is the largest wine-producer in the country, and there’s a dazzling array of vineyards and wineries that are ripe for exploration.

While many offer the chance to turn up, have a look around, and try some of the local wines, sometimes booking is required. Most wineries offer guided tours, and many also have cafes and restaurants, so it’s possible to enjoy a glass of red or white with a delicious lunch.

This region is famed for its Sauvignon Blanc, so don’t miss the opportunity to raise a toast on your travels.

Blenheim itself is a very pretty town surrounded by mountains and including plenty of greenery. In addition to the wineries and vineyards, visitors can discover more about the history of aviation in New Zealand at the Omaka Aviation Heritage centre.

Enjoy a walk through the beautifully-manicured gardens at Upton Oaks Gardens or take a hike at Wither Hills Farm Park. 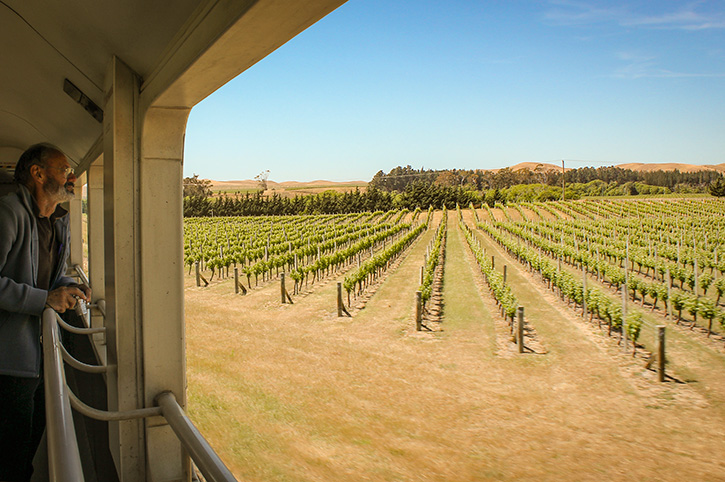 Located at the tip of the South Island, Picton is an attractive port town, which has plenty to offer visitors who are planning to travel around the South Island or cross the Cook Strait to explore the North Island.

The town is sheltered by the harbour and is reminiscent of a postcard image, boasting a cosmopolitan promenade with a bustling waterfront inclusive of an impressive collection of shops, cafes, restaurants and bars serving cool drinks and light bites with a view.

The floating maritime museum here is well worth a visit and there’s also an aquarium and a clutch of art galleries and artisan craft stores.

Away from the town’s amenities, Picton offers a diverse range of activities, including kayaking and mountain biking, while visitors can also enjoy boat charters, including cruises to spot dolphins and fishing trips.

For those keen to get their pulses racing, the Queen Charlotte Track offers unrivalled hiking and cycling experiences. Travelling on foot or on two wheels, intrepid adventurers can take advantage of mesmerising views of the Marlborough Sounds.

From here, it’s also easy to catch a ferry to Wellington or to head south to Christchurch via the Coastal Pacific train line.

The largest city on the South Island, Christchurch is an attractive urban oasis blessed with parks, gardens and a river that runs through its centre. There are plenty of shops, bars, and restaurants, but there are also places to chill out.

Hagley Park and Christchurch Botanic Gardens are well worth a visit, and punting on the Avon River is a popular activity, especially in the warmer months. 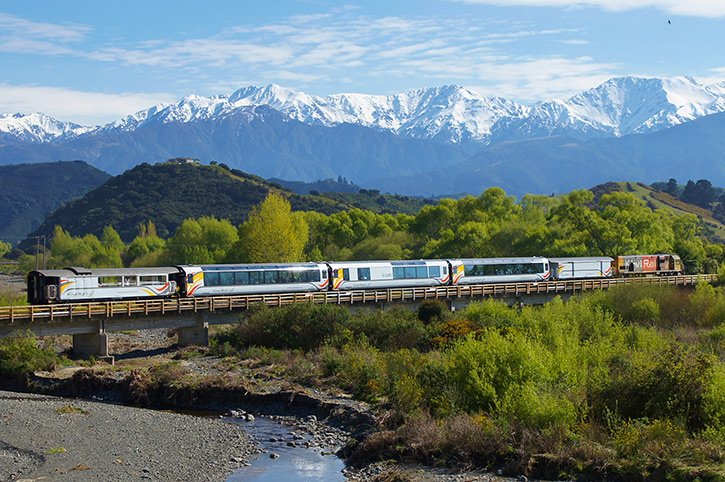 New Zealand trains don’t just take passengers from A to B. They also treat them to beautiful, scenic views of lakes, oceans, cliffs, mountain ranges and meadows. The Coastal Pacific line, when it reopens very soon, is renowned as one of the world’s most enchanting rail journeys, and it’s not hard to see why.

With everything from quaint seaside towns, rugged cliffs, golden beaches and lush grasslands to rural vineyards and imposing mountainous peaks, this is a journey nobody ever wants to end.

All along the route, the train stops at some beautiful locations and visitors can enjoy a host of activities, in addition to the chance to explore pretty towns and take advantage of traditional Kiwi hospitality.

From whale watching and dolphin spotting to hiking, cycling, and wine tasting, there’s something for everyone to enjoy between Picton and Christchurch, and what better way to travel than on the re-launched KiwiRail Coastal Pacific train.