Home » Blog » Your guide to Whale Watching in Australia

Your guide to Whale Watching in Australia 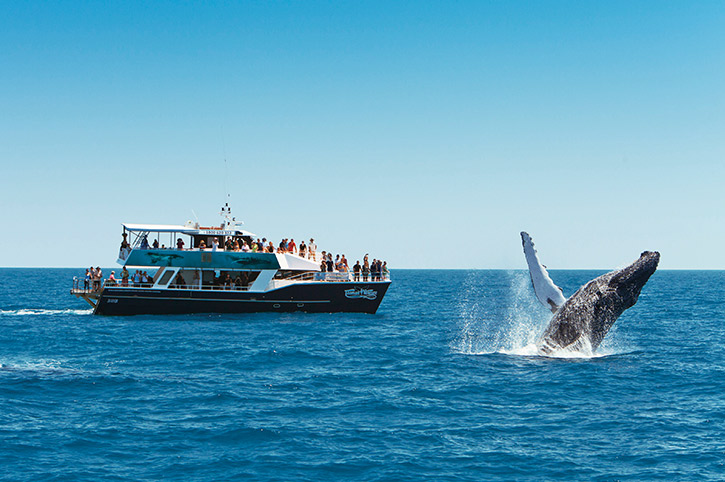 Australia may be famed for its cute and cuddly marsupials, but it boasts a hugely diverse range of land mammals, birds and marine life too. All kinds of wildlife experiences are on offer during a trip Down Under but arguably the most breathtaking is the opportunity to spot whales.

The continent is surrounded by waters teeming with marine life – indeed, almost every state sees whales frequenting its coastline – but some locations are superior to others and as whales are migratory creatures, the time of year you visit Australia will affect the types of whales you spot.

During the autumn and spring windows, whales can be seen migrating along the coastline. Humpbacks tend to head for the warm waters of Queensland and New South Wales, while southern right whales make for the slightly cooler waters of South Australia and Victoria.

To maximise the chances of a successful voyage – and to help you plan which time of year to travel – here are some of the best places to find whales coupled with the best times of year to go whale watching in Australia. We’ve broken it down state by state, too, so if you’re planning a trip to a particular region, skip ahead to the right entry or read on for your whale watching itinerary inspiration!

Queensland has an outstanding reputation when it comes to providing travellers with once in a lifetime adventures and this is one of them. Whether you’re planning a stay on the Sunshine Coast or taking a trip to the Gold Coast, don’t miss a spot of whale watching in Queensland.

The Great Barrier Reef is one of the world’s most intriguing, fascinating and beautiful natural wonders and it plays host to a dazzling array of marine flora and fauna. The area is particularly known for its population of dwarf minke whales which can be spotted in June and July. 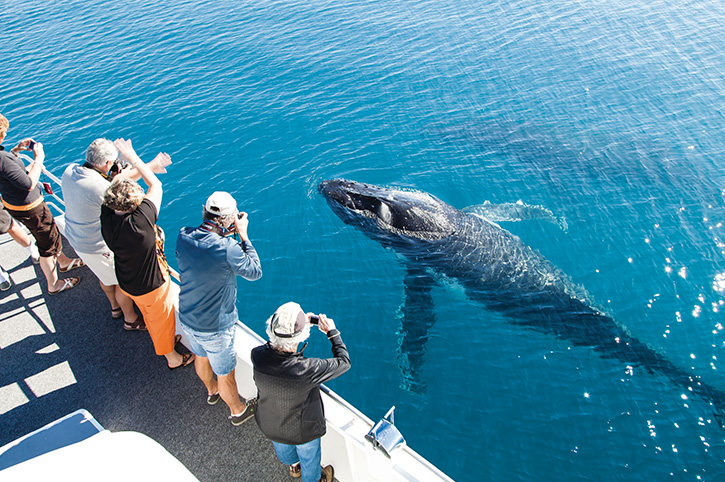 Hervey Bay, meanwhile, is often highlighted as Queensland’s whale watching hotspot. It is ideally located on the East Coast which is sometimes referred to as ‘humpback highway’. This stretch of coastal water, which runs from the coast of Sydney in New South Wales and makes its way through Queensland, acts as a channel for migrating humpback whales, making it an idyllic base to see these characterful animals, watch them play or raise their young. Whales can be spotted in and around Hervey Bay from May to November but July and August is the peak time: this may be the Australian winter but it’s when the town itself hosts a festival to celebrate the arrival of the whale pods.

For the best humpback whale watching Australia has to offer, it really is difficult to beat the coast surrounding Hervey Bay. Include whale watching in Hervey Bay as part of an East Coast self drive in Australia.

Famed for its bright lights and iconic feats of engineering, Sydney is a city that also boasts beautiful and beguiling inhabitants in its clear blue waters and is a surprisingly good spot to watch whales in the winter time.

For land-based viewings, the Gap in Watson’s Bay is a favourite local spot, but if you’re keen on venturing off dry land, whale watching tours depart Sydney Harbour’s Circular Quay and head north to watch humpbacks powering their way along the east coast.

To the south of Sydney, there is also an array of options, including the charming Jervis Bay and the picturesque coastal town of Merimbula. Both spots are known for their tranquil, clear waters and whale sightings are almost always guaranteed between May and November as humpbacks start to appear. 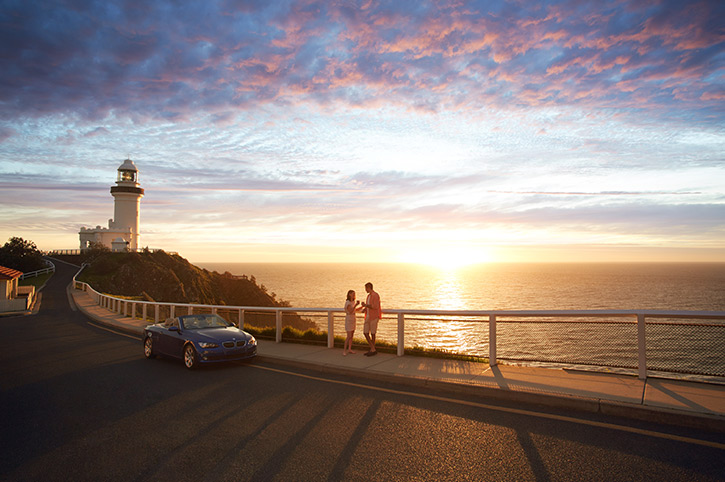 Further up the coast north towards Queensland, Port Stephens, Port Macquarie and Byron Bay are great whale watching spots too. Cape Byron Lighthouse is a popular playground for migrating whales from June onwards and is a great place for spying them.

The Great Ocean Road in Victoria is one of the most precious jewels in Australia’s crown and it’s difficult to imagine anything that can wrestle the eyes away from rolling waves, intricately shaped rock formations and towering stone pillars.

But the good news for wildlife lovers is that the Great Ocean Road isn’t just a mesmerising series of geographical features and organic wizardry, it’s also a haven for southern right whales, who prefer the cooler waters of the southern coast to the warmer climes of the eastern seaboard.

If anything was going to tear the eyes away from the stunning landscape of this area and capture the attention of visitors embarking on this iconic road trip, the subtle flick of a tail is guaranteed to succeed!

Logans Beach, only three hours away from central Melbourne, is arguably the best place to see wild whales along this stretch of the Victorian coastline. The shallow waters close to shore provide the ideal space for mothers to tend to their young and adults often stay here with their calves for several weeks between May and September. This watery nursery acts as a springboard for migration to Antarctic waters later in the year which begins when the young calves have built up enough strength and stamina to tackle the arduous journey. 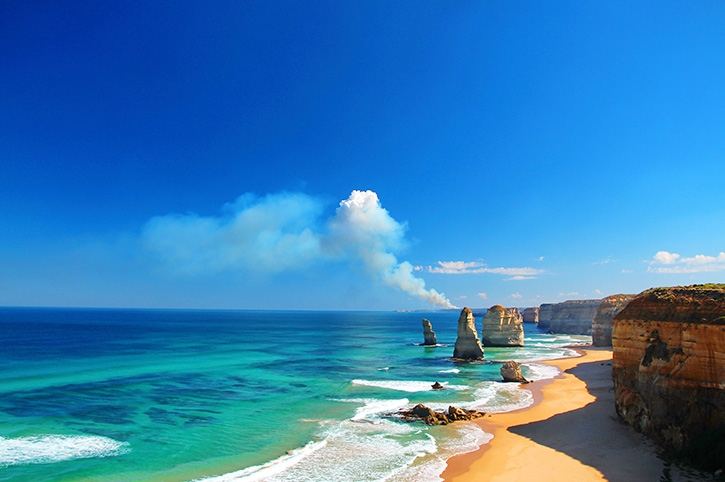 Lady Bay, near Warrnambool, is another excellent base for spotters as the whales here have been known to come close enough to give humans a soaking as they spout water from their blowholes!

Visitors exploring the Great Ocean Road in August and September may be lucky enough to spot rare blue whales feeding at Cape Nelson, around an hour and a half from Warrnambool. This coastline is also frequented by bottlenose dolphins, fur seals and even humpback whales, so the chances of sightings are quite high when it comes to marine mammals in these parts.

It might be a relatively small island tucked away off the south coast of the country but Tasmania is a wildlife haven boasting spectacular natural beauty. It has a reputation as a paradise for nature lovers, hikers and explorers of all kinds, as well as those hoping for a relaxing time on the beach in Hobart. It is also a hotspot for whale watchers.

Southern right whales can be spotted in the waters surrounding Tasmania between May and July or between September and December, and it’s most common to see humpback and southern right whales gliding through the waters of Great Oyster Bay and Freycinet Peninsula. Head here for some of the best whale watching experiences but Adventure Bay and Mercury Passage are other hotspots well worth exploring too.

The best way to experience Tasmania is with an independent self drive holiday such as our 6 day Touring Tasmania itinerary.

South Australia is one of the best places in the country to see southern right whales. Between June and September, these statuesque creatures can be seen in Encounter Bay in Victor Harbour and around the Fleurieu Peninsula. The calm waters here are ideal for mothers and calves, which is a particularly thrilling sight.

This area is easily accessible from Adelaide and also just a stone’s throw away from South Australia’s world-renowned wine country of McLaren Vale and – further to the north – the Barossa Valley, so whale watching here in the Australian winter is the perfect add-on to a trip to the region and the perfect excuse to sample some of the warming, fruity red wines the area is known for around the globe.

Further west along the coastline, the town of Ceduna is a popular spot for whale-watchers that offers land-based viewing opportunities. If there’s no action visible from the beach, try the viewpoint, or alternatively, book a boat tour to get closer to the waters.

Interestingly for whale lovers, Ceduna is also home to the Great Australia Bight Whale Sanctuary where visitors can get up close and personal with southern right whales in the heart of their breeding ground close to the Bunda Cliffs.

This area is around eight hours’ drive west of the city of Adelaide, so you will need a few days to make this trip, but marine mammal lovers won’t be disappointed here. If you have another day to spare, make for the Head of the Bight lookout point. At another three hours west of Ceduna this is a long trip, but very much worth the effort if you are in search of whales. It is one of the most spectacular spots to land your eyes on whales and the Head of the Bight Lookout point is ideally located to see southern right whales as they migrate during the winter. June to October is the best time to spot whales in this area.

In the state of Western Australia, the south coast is very much the place to see whales in the wild.

Between June and November, it’s common to see both humpback and southern right whales in the waters of Flinders Bay and Albany. During the migratory season, Albany is an excellent place to see whales from Antarctica move to warmer waters further north. Humpback whales follow a path along the west coast heading further north past Perth and on towards Broome, mirroring the humpback highway on the east coast, making it possible to spot whales along most of Western Australia’s coastline.

Visitors planning a trip here in September, towards the final few weeks of the humpback whales’ migrating season, may also be fortunate enough to see rare blue whales, which can sometimes be spotted in Geographe Bay in the area south of Perth close to the town of Dunsborough – close to another of Oz’s wine-producing regions. At this time of year, the magical sight of female adult blue whales travelling alongside their calves is a particularly majestic sight in this area and the temperate climate in Perth around this time of the year makes this a great time to plan your visit. Keep those eyes peeled for schools of energetic bottlenose dolphins too.

Away from the stunning sights of the whale migratory season, this is also a good spot to happen upon the truly magical sight of orcas dancing gracefully in Bremer Bay a bit earlier in the year. A stone’s throw from Albany, this secluded spot tends to attract a pod of around 100 killer whales between February and April. The nutrient-packed currents that flow north from the frozen waters of Antarctica are perfect for hungry marine creatures to take advantage of.

Apart from the landlocked Capital Territory in Canberra and the Northern Territory, pretty much the whole of the Australia continent’s coastline is a wonderful destination for whale watching. 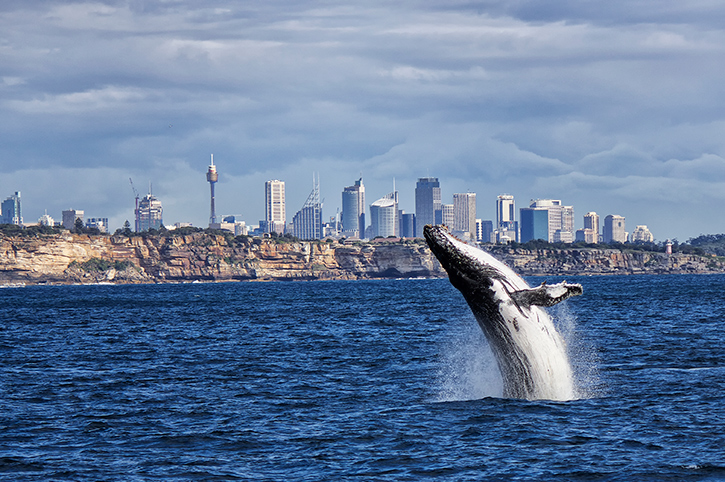 Tours operate on a regular basis with experienced guides and crews with technology to track whale movement in order to provide visitors with the best opportunities to catch a glimpse of these spectacular sea creatures in their natural habitat.

The sheer size and majesty of these creatures make it easy to see why this is such a popular pursuit and the fact that they are visible in the waters surrounding almost every state in the country, means that this is a versatile addition to any Australia holiday. Given the diverse range of species patrolling the watery highways that flank the eastern, southern and western coastlines, as long as you pick the right time of year to visit, you’ll be in luck to witness wild whales.

So whether you’re heading to Oz with the express purpose of seeing whales and other wildlife or simply tagging a spot of whale watching onto a trip you already have in mind, you’re sure to enjoy incredible whale watching experiences in Australia. Start planning your adventure today.

« Where To Go & What To Do In Florida
Great Waterways: Asia River Cruises »