Must Visit National Parks in Kenya 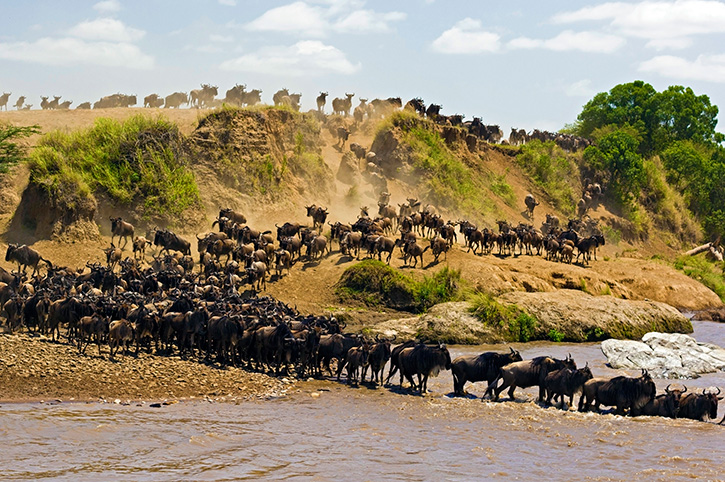 Kenya is home to some of the most beautiful National Parks in Africa and boasts a unique wealth of flora and fauna unrivalled in most other parts of the world.

Aware of its exceptional natural heritage, the Kenyan government has ensured that its riches are protected and resources are used in a sustainable way with the introduction of National Parks and Nature Reserves services to promote the protection of its wildlife.

As such, National Parks in Kenya are strictly regulated. It is forbidden to hunt and practice any activity that may damage the environment. Crops and facilities are also prohibited in these protected areas. In Kenya’s nature reserves, rural activities and certain grazing rights are authorized by the authorities and managing bodies and because of this tourists will find pristine parks and local guides who respect and value their natural surroundings

A safari in Kenya’s parks and reserves is also an opportunity to discover varied landscapes and ecosystems, from the great savannah plains of the Masai Mara to the mountainous forests of Mount Kenya, Amboseli with its elephants and Kilimanjaro in background.

Those who want to get off the beaten track will go further north, to the Samburu and Shaba reserves, or walk through the typically African landscapes of Tsavo, made of baobabs on the burnt red ground. 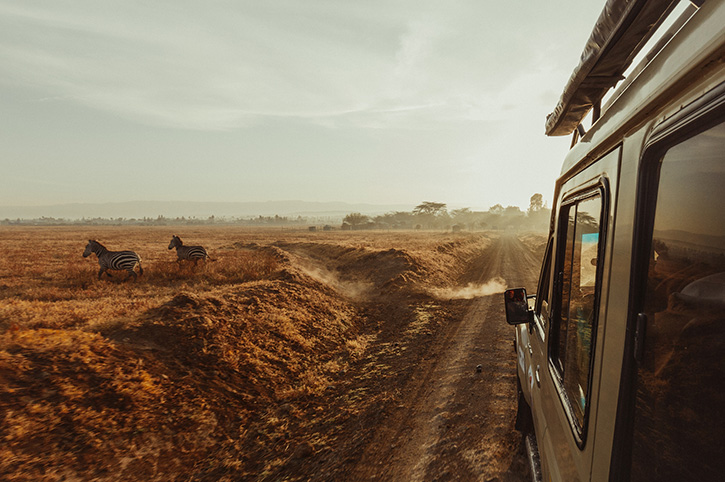 The only place to start a run-through of Kenya’s National Parks is with the most famous of the lot – Masai Mara. The name comes from the Mara River that runs through the park and Masai from the land where it is located.

Made up largely of hills covered with grassy savannah, the Masai Mara Reserve offers sumptuous landscapes as far as the eye can see and an impressive density of animals. Over a surface area of 1,510 km2 this is a simply massive park, so three to seven nights in the area are highly recommended to see as much of it as possible. Indeed, if you are planning a stay of at least four or five nights, it might well be worth combining two different accommodations in different parts of the reserve to make the most of your time here.

Geographically, the Masai Mara is the northern end of the Serengeti, an even larger ecosystem of 25,000 km2. Most of it is in Tanzania rather than in Kenya but this area is home to the world’s largest land migration of animals at various parts of the year.

The characteristic landscapes of the Masai Mara are rolling hills as far as the eye can see, covered with green savannah and trees. According to the seasons, the horizon can be lined with a parasol of colourful acacia flowers and with an abundance of animals in the area this is an incredible sight. The fertile plains feed huge amounts of herbivores: hartebeests, buffaloes, impala, wildebeest, zebras, elephants, cobs, Grant’s gazelles and many others, so beyond the Big Five to see here, there are also tonnes of other attractions. 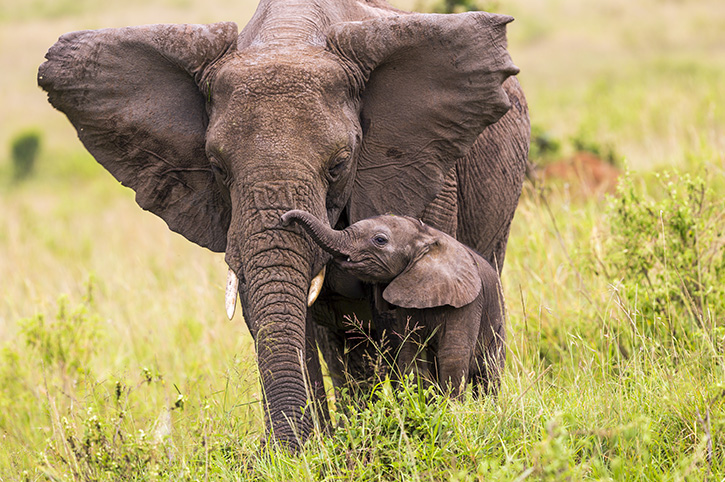 In terms of your stay, however, it’s worth looking at the geography of the park as the Masai Mara can be split into four separate zones:

In the East, the Ngama Hills towards Sekenani and Keekorok is the most easily accessible part of the park for those whose base is in Nairobi and it concentrates a large part of the accommodation in the reserve.

The central region of the park, consisting of the plains that are between the Mara River and the Ngama Hills, is home to large herds of herbivores, a great place to explore if seeing these creatures is on your Africa checklist.

To the North West are the Oloololo or Siria cliffs, escarpments and slopes that form one of the natural borders of Masai Mara and define it from the outside world. There are many camps located at the top of the escarpment which enjoy a superb view of the plains below. These are ideal places to spend an evening or two, looking down on the majesty of the park you’ve spent the day exploring on foot or in a vehicle.

In the South West, the Mara triangle is enclosed by the Mara River and the Siria escarpments. This area is very rich in predators and a 4×4 vehicle is usually necessary to navigate the tracks, but with the biggest game animals in attendance the pay-offs are great. 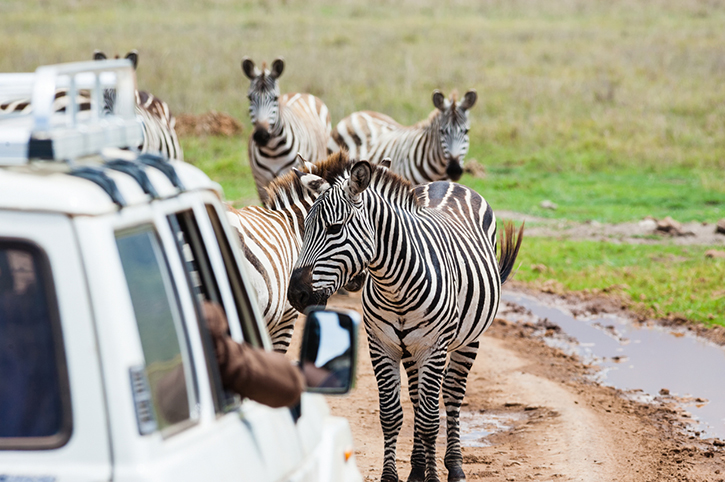 The Masai Mara Park is world famous and therefore very popular, especially in its north-eastern part which is the closest to Nairobi. For certain, no trip to Kenya is complete without it. Our Africa Experts recommend a stay at Governors Camp for your visit to Masai Mara.

If you’re in search of elephants and giraffes with the superb spectre of Kilimanjaro in the background, you need to visit Amboseli.

The main attraction of Amboseli National Park is its location on the border with Tanzania, at the foot of Mount Kilimanjaro. Indeed, even if the highest mountain of Africa is not located on Kenyan territory, Amboseli is still the perfect place to admire its snowy summit, with wild animals in the foreground. This is a 392 km2 national park, where it is best to stay for a few nights to get a real feel for this land.

Amboseli is one of the oldest parks in Kenya, having existed since 1974. Like Masai Mara, it is located in Masai territory and many traditional villages are located on the outskirts of the park. These pastoral people have kept their traditions intact and are often seen wearing red blankets, watching their herds at the edge of the tracks. The landscapes of Amboseli Park are mainly grassland savannah with groves where elephants and giraffes graze. 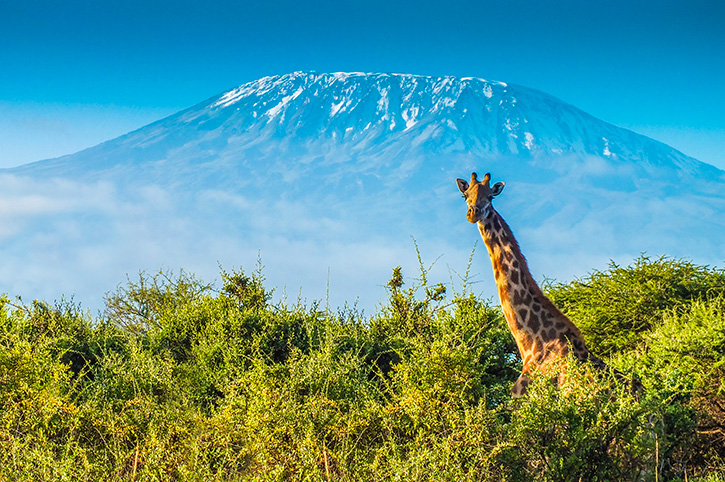 Experience a stay in a luxury tent in the Amboseli with Tortilis Camp.

Amboseli is popular because it is a logical step between Nairobi and Mombasa, where many tourists get their nature fix before heading to the beach or to going diving in the warm waters off the coast. Yet, the scenery here makes it easy to forget the presence of others and far from being a stop off on the way to other things, this is an incredible park to visit by itself.

A park known for its baobabs and red elephants, Tsavo National Park is a park that we love for its vastness, its wild side and its quintessentially African feel with red soil and hot sun. While it is less easy to find safari animals here than it is in Amboseli or Nakuru, research and knowledge is all part of the fun of a safari!

Like the other national parks mentioned, multiple nights are recommended here to see the delights of its 20,800 km2 of land. If you stay more than two nights, the differing landscapes of the East and West regions of the park mean that combining two different accommodation options is a great shout. Tsavo was originally a single huge park but it is now cut by a four-lane road and railroad linking Mombasa to Nairobi. In effect, this means there are now two parks because animals don’t usually cross between the two.

In the west, expect hills and rocky cliffs with bushy scrub. In the east, you’ll find large rolling grassy plains characterised by its bright red soil. Our Africa Experts highly recommend a stay at Sarova Salt Lick Lodge during your time in Tsavo National Park. 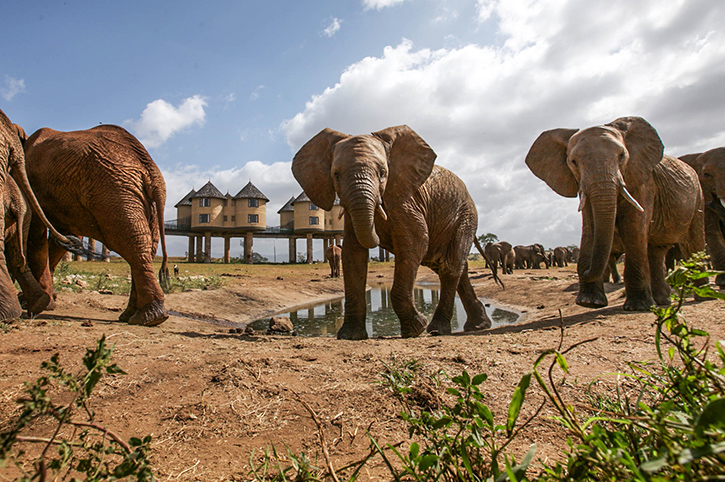 Don’t miss the Mzima Springs if you’re in this region. These are two bodies of water fed directly by the melting glaciers of the top of Kilimanjaro rolling down to the plains in the Tsavo. This permanent water maintains an oasis of greenery that contrasts with the surrounding savannah. The development of a small underwater observatory allows visitors to the park to approach crocodiles and hippopotamuses who have taken up residence there in a safe and discreet way. It is rare to be able to observe these animals in crystal clear water but this is very much your chance.

Aberdares National Park and Mount Kenya National Park are located on the mountainside, in the forest and in a cool and humid climate. A stopover in either of these parks is an original and interesting experience and an opportunity to see animals different from those normally found in the other Kenyan reserves.

These parks are located at over 2000m altitude, on the slopes of Mount Kenya – the second highest peak in Africa at 5,199 m – and in the Aberdares range which rises in parts to around 4,000 m. Covered by dense, green forest all year round, they are home to diverse flora and fauna not found in other parts of Kenya such as species of birds and monkeys.

The animals come to drink and eat in the lush vegetation found in this land so visitors can easily observe them in an open space. The clearings are illuminated at night and the lodges have a bell system that can be activated during the night if a rare animal makes an appearance. 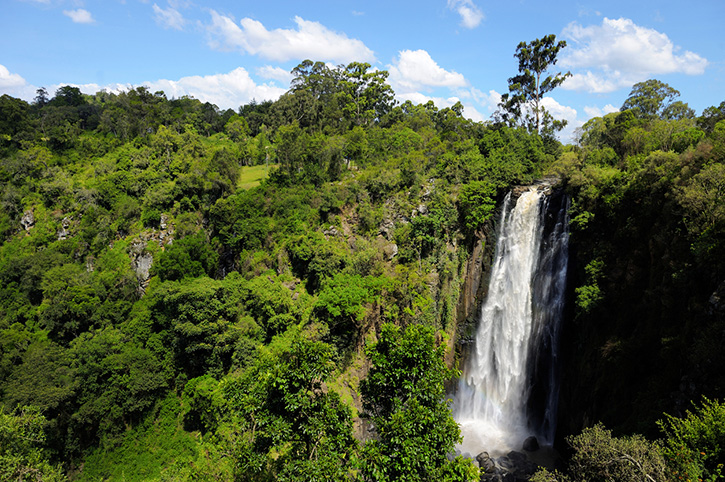 The Samburu and Shaba Reserves are located in the Northern Central part of Kenya and will be particularly appreciated by travellers in search of safaris off the beaten track. The landscapes here are very different from the other parks: the soil is more arid and the region is home to rarer species like the East African Oryx or the Imperial Zebra. This is also a great region to keep in mind if leopards are an animal you’re particularly interested in seeing as Samburu is home to one of the largest leopard populations in Kenya.

Together, the Samburu, Shaba and Buffalo Springs reserves cover 844 km2, but despite not being as large as the other parks mentioned above, they do also demand a stay of a few nights to make the most of your trip. Our Africa Experts highly recommend you spend a night or two at Elephant Bedroom during your time in Samburu Game Reserve.

Despite so much richness when it comes to parks and reserves, Kenya also has much more to offer to travellers ready to discover the country. Even if the savannah is spectacular, Kenya has other treasures, too, many of which are hidden at the bottom of the sea.

In the south of the country, discover the underwater landscapes of the marine reserves of Diani, Mombasa or Mpunguti with a Dhow Safari Day Tour. Admire the colours of the fish and swim with manta rays, turtles or dolphins. In the evening relax on pristine beaches and discover the food of the coast with a meal of barbecued seafood set to the soothing soundtrack of the waves ebbing and flowing onto the shore. 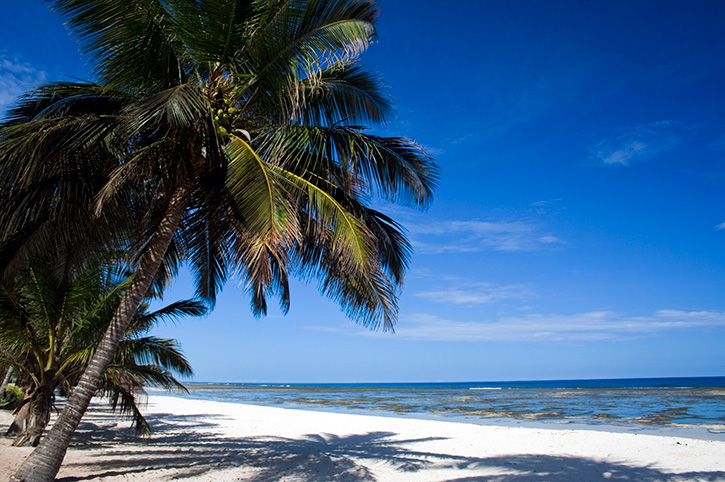 Kenya has so much to offer its visitors and a couple of weeks here spent travelling around the plains and in the parks is your ticket to some of the most spectacular sights nature will allow: from landscapes of dramatic mountains to the thrilling sightings of the Animal Kingdom’s most dangerous predators. Make the most of night and day with our beautiful range of handpicked Safari Lodges in Kenya.

There’s plenty of choice on offer and so much to see and do but don’t forget to also make time to relax on Kenya’s beaches before you leave too. Let our Africa Experts help you start planning your Kenya Holiday today.