6 Best Rail Journeys in the World 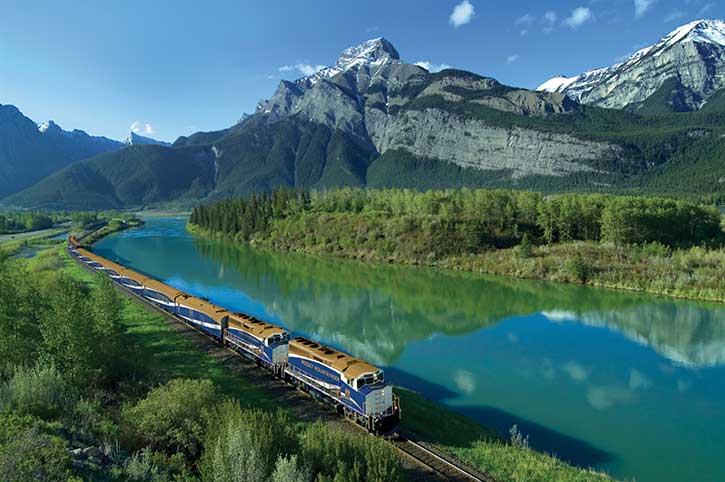 Travelling by train is a fabulous way to see the world and there are some truly magnificent rail experiences on offer. From speeding through plains and soaring above lakes to crossing mountain ranges and watching the waves crash against the cliffs, there’s scope to enjoy some magical on-track voyages.

Here’s a guide to the benefits of rail travel and some inspiration for unforgettable trips including some of the best train journeys in the world.

The joys of travelling by train

Travelling by train may not be the most obvious way to get around when booking and planning a holiday, but there’s a lot to be said for booking a rail excursion and linking it into the trip.

Taking the train enables travellers to relax and soak up the sights as well as enjoying an experience that doesn’t require focusing on the road ahead, following a map en route to a destination or watching what you drink before getting behind the wheel. 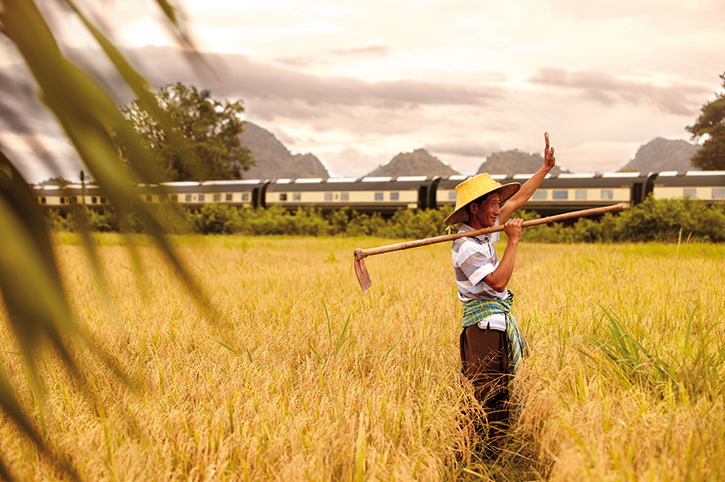 With a railway adventure, visitors can sit back, get comfortable, chill out and take in panoramic views from every angle.

There’s also the opportunity to talk to companions at leisure to or get to know fellow travellers. You can reach areas that may not be accessible on foot, or by car or boat, and design an itinerary that combines all kinds of activities with multiple stops along the way.

If train travel sounds appealing, let’s take a look at some of the most iconic rail itineraries in the world.

1. The Ghan in Australia

The Ghan is one of the most iconic trains on the planet and it covers some of the most scintillating landscapes that are accessible to travellers. This epic adventure treats visitors to Australia to an opportunity to travel from Darwin to Adelaide, taking in a veritable feast of natural wonders along the way. 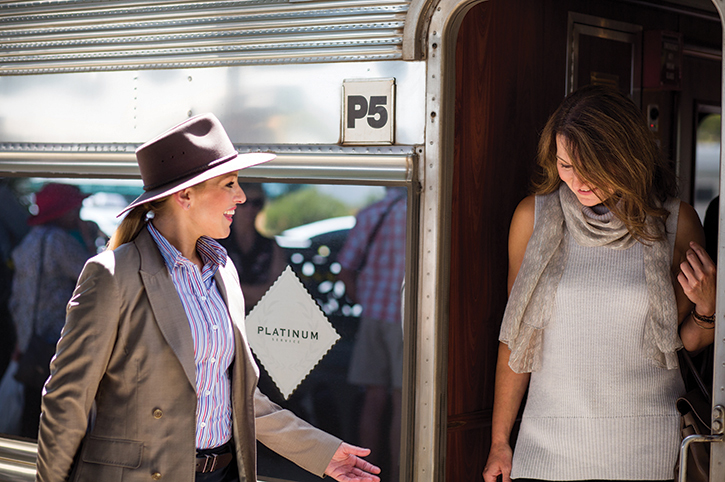 Highlights on this famous route include Alice Springs, the Katharine Gorge and Coober Pedy, but most people take the train to explore the Red Centre.

This part of the outback is dominated by sweeping plains, arid ground and giant monoliths that pierce the bright blue sky. The piece de resistance for most guests is Uluru. A towering block of burning red rock, this is a natural phenomenon that has intrigued and captivated human beings for centuries.

A symbolic, sacred place for the Aboriginals, Uluru has a place in every traveller’s heart due to its sheer scale and size and its unquestionable beauty. Close by, visitors can also discover the highlights of Kata Tjuta.

Our favourite itinerary aboard The Ghan affords time to take optional excursions in addition to a trip to the underground lair of Coober Pedy, an outback barbeque at Telegraph Station and a river cruise at the Katharine Gorge. These include a scenic flight in Uluru and a thrilling helicopter flight over Kakadu National Park too. 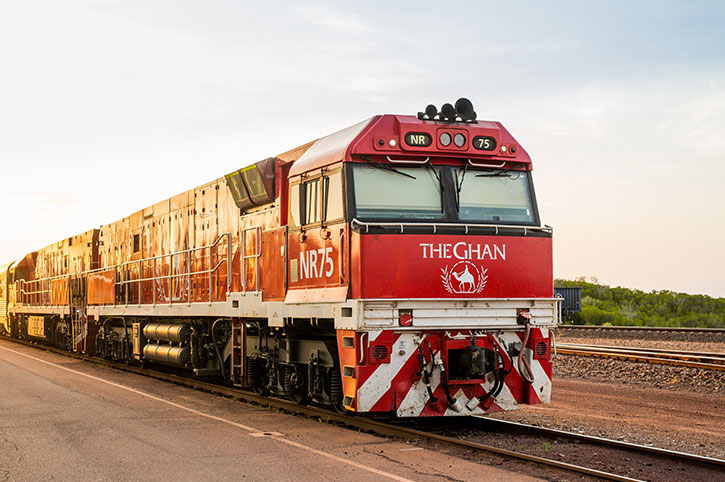 Travelling on the Ghan offers visitors an array of experiences and the chance to relax in luxurious surroundings with all food and drinks included.

Travel inspiration, delivered straight to your inbox:
I am interested in...
.
Thanks! Please check your inbox for an email to confirm your subscription.

Arguably the most famous train in the world, the Rocky Mountaineer treats travellers to a once in a lifetime opportunity to explore the stunning beauty of Canada’s Rocky Mountains and the picturesque scenery that appears around every corner.

Departing from the beautiful waterfront city of Vancouver, the train makes its way to the heart of British Columbia, taking in scenic views of vivid blue lakes, tumbling streams and waterfalls, and snow-capped peaks as far as the eye can see.

Pre-book one of our favourite Vancouver hotels before your train journey begins. 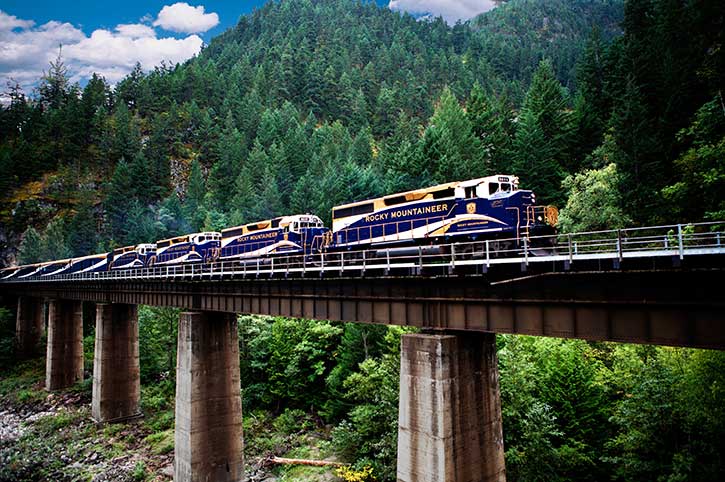 Having explored Kamloops, the train continues to Alberta, navigating the Yellowhead Pass to provide jaw-dropping views of Jasper National Park.

The Rocky Mountaineer offers a magical adventure in the clouds, which is impossible to describe and do justice to on paper. Even guidebook photos and Instagram snaps don’t tell the whole story and visitors will emerge with spectacular photos, but more importantly, memories to last a lifetime.

A two-day Rocky Mountaineer itinerary from Vancouver takes in the verdant meadows of Fraser Valley, the powdery summits of the Cascade Mountains, the clear waters of Kamloops Lake, the Cariboo Mountains and finally, the iridescent lakes and glistening peaks of Jasper.

The Blue Train is a wonderful way to see South Africa. Travelling from the bustling city of Cape Town to the cosmopolitan city of Pretoria, the train takes a route that affords views of everything from rugged cliffs and imposing mountain ranges to sandy plains and lush green vineyards. 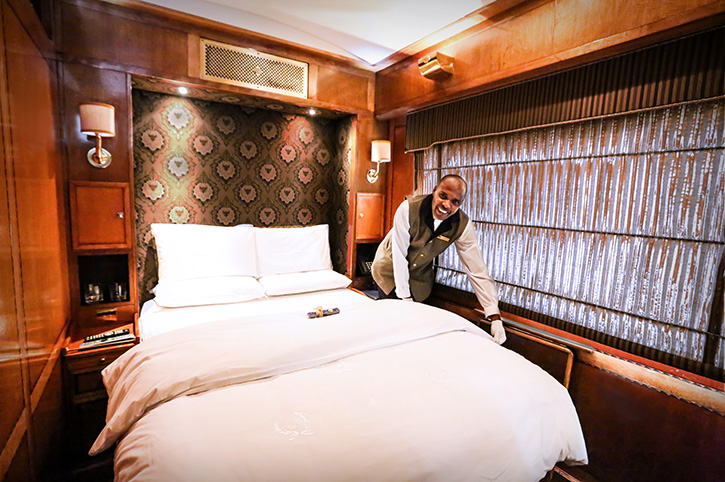 You may also like the Best Things to do in Cape Town.

The Blue Train voyage begins in Cape Town and travellers can enjoy spectacular vistas of Table Mountain before crossing the Western Cape to the dry, desert-like plains of the Karoo.

The Western Cape is known for its diverse terrain and guests can watch in wonder as the train speeds past mountainous peaks and verdant winelands. This scenery is a stark contrast to the arid lands of the Karoo, which offer a very different take on natural beauty.

On arriving in Kimberley, guests can enjoy a trip to the Open Mine Museum, which provides a fascinating insight into the rich mining history of the country and a chance to glimpse the impressive Big Hole: a giant crater over 215 metres deep.

The final stop is Pretoria, a city famed for its mesmerising jacaranda trees, which burst into bloom towards the end of the year. Why not add a few nights in a hotel in Pretoria to extend your holiday. 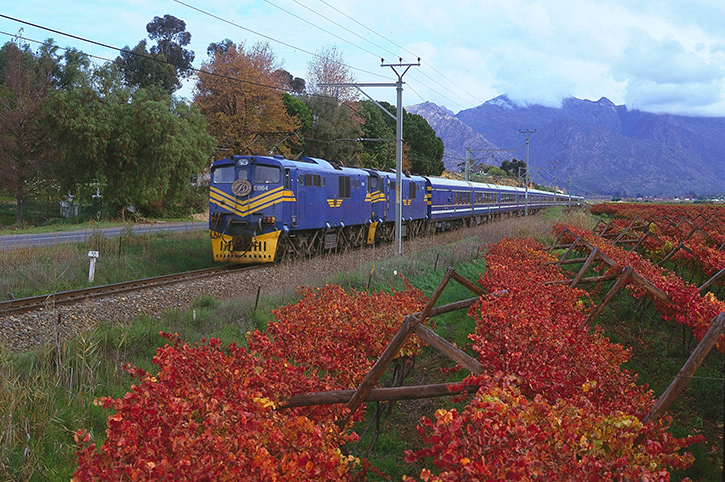 Crossing the South Island, the TranzAlpine track is one of the most breathtaking rail routes in the world.

Providing a snapshot of the striking beauty of New Zealand’s South Island, this journey takes in mountains, lakes, rivers, glaciers, meadows, glades, plains and snowfields. It’s no exaggeration to say that there is something different to see around every bend.

Leaving from Christchurch, the train makes its way to Greymouth on the West Coast, travelling through the vibrant fields and meadows of the Canterbury Plains before stumbling upon the incredible gorges and babbling waters of the Waimakariri River. 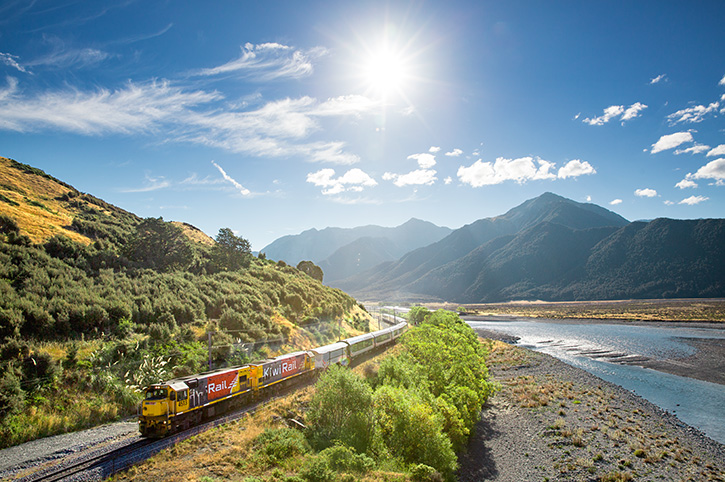 Next, travellers will be treated to unspoiled panoramic views of the Southern Alps, which are blanketed by snow when temperatures tumble. Having enjoyed vistas of the snow-capped summits, travellers will lay eyes on the serene woodlands and dense beech rainforests that lead the way to the final destination, Greymouth.

Having arrived in Greymouth, visitors will have successfully navigated 19 tunnels and four viaducts.

The trip takes around four hours and there’s an audio commentary on board, which provides details about different locations and also shares some popular Kiwi folk tales and myths. All carriages have panoramic windows, which afford stunning views.

The Eastern & Oriental Express is an inimitable rail experience, which catapults visitors back to the days when train travel was the ultimate in luxury and exclusivity. This incredible itinerary takes travellers from the hustle and bustle of Bangkok to the futuristic city of Singapore via the Malay Peninsula. 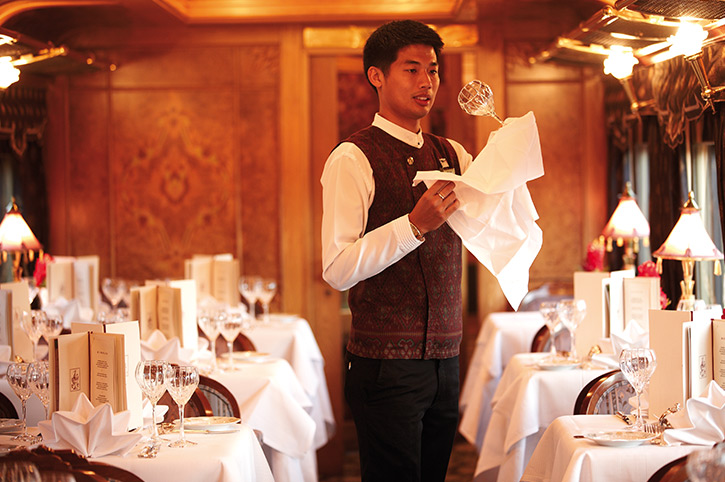 The journey begins in Bangkok and the train sets off for Kanchanaburi, where visitors will disembark for a tour of the area and a cruise on the iconic River Kwai. Look out for traditional teak houses and the infamous bridge before moving on to the Don-Rak War Cemetery.

Pre-book one of our favourite Bangkok hotels for a few nights before you board your train journey.

The next port of call is the Malaysian village of Kuala Kangsar which is reached after traversing limestone mountains that are surrounded by green rice fields that sparkle in the sunlight.

The village welcomes visitors and treats them to a cultural tour and there’s also a chance to sample local delicacies and visit the plantations.

The final stop is Singapore, a city that offers everything from awe-inspiring urban gardens and a tropical zoo to decadent hotels and the chance to soak up the sun on exotic islands a short ferry ride from the centre. Find the best things to do in Singapore and easily add them to the end of your holiday. 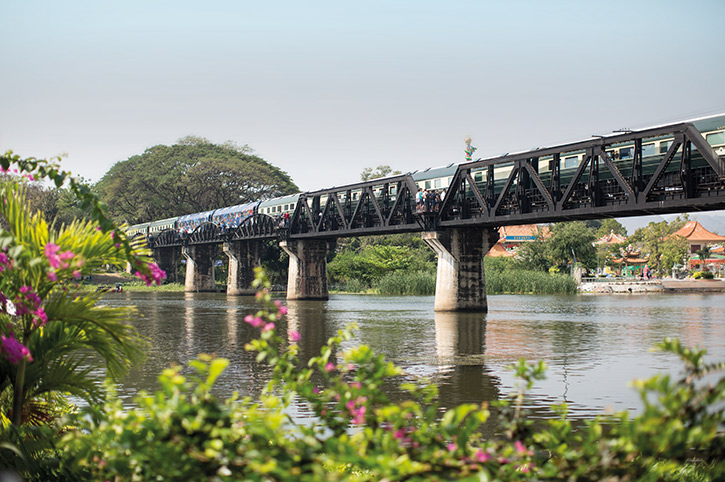 Travelling on the Eastern and Oriental Express is a lavish way to get around and see three very different countries. Guests have access to luxury lodgings, 24-hour steward service and daily three-course lunches and four-course dinners.

Widely regarded as one of the most scenic rail routes in the US, the Coast Starlight transports visitors from L.A. to Seattle, taking in the glorious Pacific coastline along the way.

On departure from Los Angeles, travellers will make for Santa Barbara before continuing to San Francisco Bay, Sacramento and Portland. The beaches that line the coastline between L.A. and San Francisco are picture-perfect and they encapsulate everything that you imagine when you think about spending sun-drenched days in California.

Speeding up the coast, golden sands give way to cityscapes and of course, a view of the jewel in San Francisco’s crown, the Golden Gate Bridge. 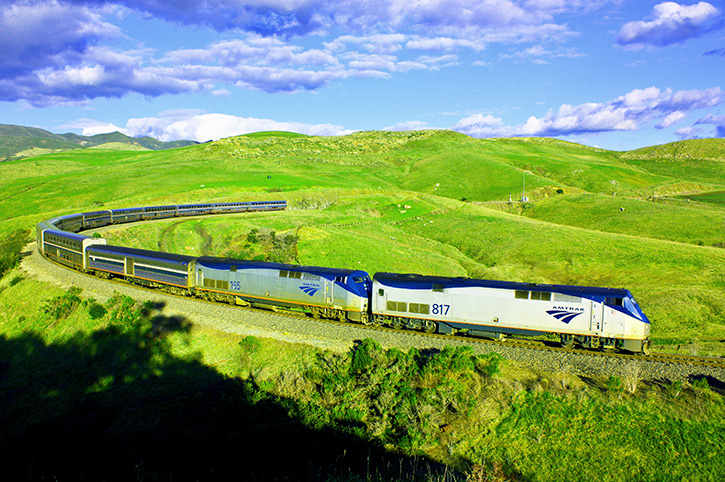 Discover our favourite things to do in California before your rail journey departs.

The bay is incredibly pretty but it gives way to the cool, laid-back cities of Seattle and Portland. This is a scenic route, which covers a vast array of different terrain and provides amazing views in the lap of luxury.

From beaches and coves to the rocky peaks of the Cascade Range and Mount Shasta and glistening blue lakes, this trip highlights the diversity of America’s geography and affords a range of travel adventures within a single holiday.

Aboard the train, guests can enjoy free Wi-Fi access to share those all-important snaps and relax in air-conditioned carriages with comfortable, reclining seats. 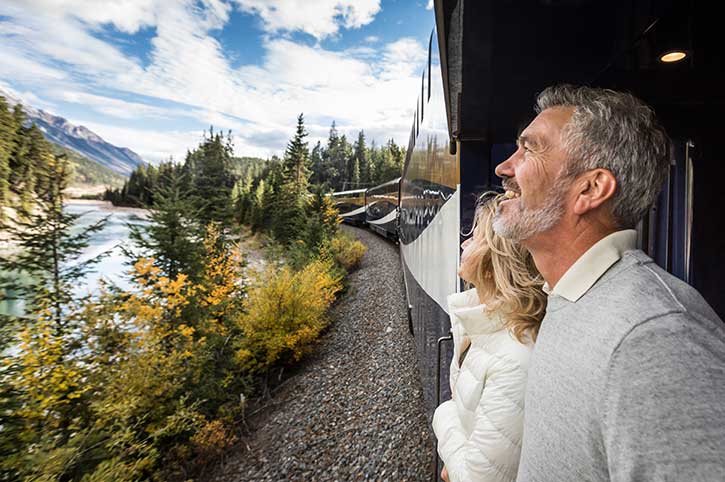 Travelling by train offers a wealth of advantages and it’s a brilliant way to see sights that simply aren’t possible when exploring on foot or driving a car. If you love the idea of a rail journey as part of your next holiday, there are some wonderful itineraries on offer worldwide.