Home » Blog » Wildlife of New Zealand: Where to Go & What to See

Wildlife of New Zealand: Where to Go & What to See 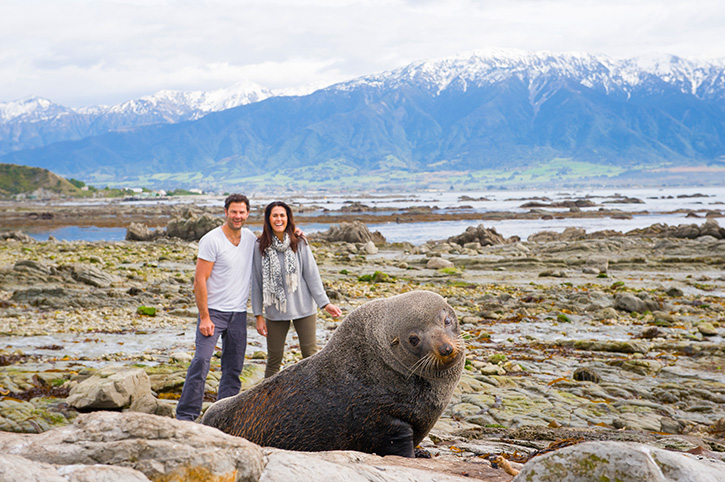 New Zealand is a haven for nature and wildlife lovers. This beautiful country is home to a host of intriguing native species and the unique geography of the two islands lends itself to some truly spectacular wildlife tours and excursions.

Visitors planning to combine action-packed activities with bird spotting, boat trips and one-of-a-kind animal encounters won’t be disappointed. Don’t miss some of the best wildlife experiences on offer during your visit.

Read on to discover the best places to go and the sights to expect to see when it comes to the diverse wildlife of New Zealand.

Whale watching is an incredibly popular tourist activity and whales are amongst the most precious and prized of New Zealand’s wildlife. When it comes to spotting these incredible creatures, Kaikoura is widely regarded as the best spot on the islands to see whales on a regular basis.

When visiting Kaikoura New Zealand, there’s a host of tours available and trips run every day. The weather conditions can be unpredictable and tours may be cancelled if high winds or rough seas are forecast, but once the boats with experienced crews set off from the shores of the town’s port in search of nature’s most majestic animals, sightings are very successful.

Boats are equipped with advanced technology and crews keep in touch to track movement and maximise the chances of being able to spot groups of whales in their natural habitat.

Most commonly, sperm whales are spotted in the waters surrounding New Zealand, but visitors exploring the seas during migration season may also be lucky enough to see southern right whales, orcas, humpback and blue whales.

Whilst giant sperm whales can be found all year-round, the best time of year to see other species is between June and August. At this time of year, many species leave the cool waters of Antarctica in search of warmer climes further north. 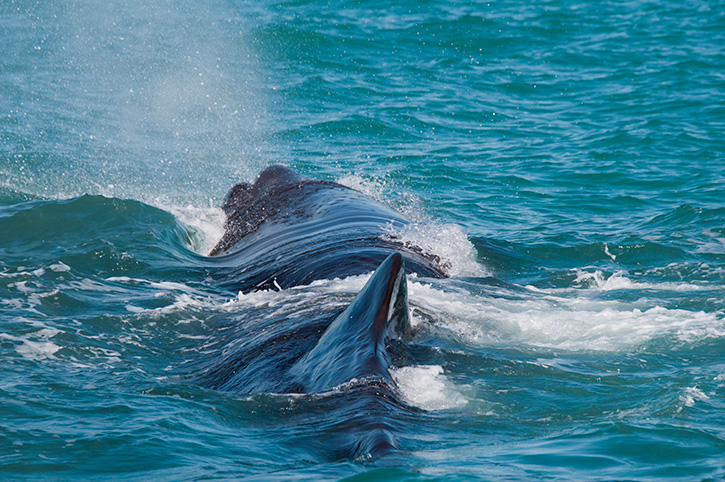 Just a stone’s throw from the hustle and bustle of Auckland’s vibrant centre, there are more serene whale watching opportunities in the Hauraki Gulf. This stretch of water, which flows into the city’s famous harbour, is a popular spot for orcas to convene and many a whale has been spotted in the harbour itself.

Located to the east of the city streets, the gulf is one of the best places to catch a glimpse of the iconic orca whale as it migrates to warmer waters in the colder months of the year. Although the gulf is famed for its orca sightings, it is possible to find other species here, including Bryde’s whale, pilot whales and the sei whale.

Whale watching tours are widely available and boats depart from the harbour itself.

The Bay of Islands is a simply stunning location for any type of holiday. Comprising a series of islands, inlets and secluded coves, this is the place to be for sunbathing, water sports and chilled out days at the beach, but it’s also a spectacular choice for wildlife fans.

Although there are no dedicated whale watching tours, it’s often possible to spot whales out at sea in the Bay of Islands. Between May and July, migrating species like the ones found in Auckland and Kaikoura make their way upstream and can often be spotted during kayak safaris and leisurely island boat tours.

The Marlborough Sounds occupy an enviable location along the whale migration route and as such, boast an abundance of marine mammals.

In the migration season in the southern winter, several whale species travel towards the Cook Strait and in the Marlborough Sounds the most common species spotted is baleen whales. It’s also possible to see orcas here too.

Located in the Bay of Plenty, Whakatane is an excellent place to go spotting. Just off the coast of the mainland lie White Island and Whale Island.

Taking a boat trip from the shores of Whakatane offers incredible opportunities to see a raft of whale species, including orcas, pilot whales and minke whales in the waters surrounding these tiny islands.

Sometimes, it’s even possible to make out the distinctive shape of the whale tail from the mainland.

New Zealand is one of the best places in the world to see whales, but it also boasts a tremendous dolphin population. The ocean waters surrounding the islands come alive with the elegant, darting movements of pods of dolphins travelling together, often close to boats.

There are 13 different species of dolphin found in New Zealand’s waters, the most common of which include dusky, bottlenose and Hector’s dolphins.

Many of the species spotted off the coast of New Zealand are known for being friendly and inquisitive and they often appear at the side and back of boats, as they enjoy riding along in the jet-stream.

Dolphins tend to travel in pods of up to 30 animals, making for an awesome sight.

Dolphin spotting tours are available all over New Zealand and most whale watching trips stumble across their fair share of dolphins too. But for those keen to get up close and personal with them, and return home with memories to cherish, it’s possible to book a swimming with dolphins tour, which enables visitors to get into the open water with the dolphins.

Tours are available in Kaikoura, Akaroa, the Bay of Islands and the Marlborough Sounds. It’s also common to see dolphins when kayaking in New Zealand and many aren’t afraid to come up and take a closer look at the boat.

New Zealand’s unique natural scenery makes it a wonderful place for those keen on birdwatching. The country boasts a diverse range of avian creatures, from giant sea birds like the imposing albatross to the tiny Chatham Islands black robin.

Perhaps the most iconic bird species in the country is the kiwi. There are five species of this bird in New Zealand, all of which are threatened with extinction. These are curious creatures, as they cannot fly and they don’t have a tail, but they are famed for their soft, loose feathers and distinctive beaks.

Brown kiwis live on the North Island, while great spotted kiwis and Tokeoka are native to South Island. 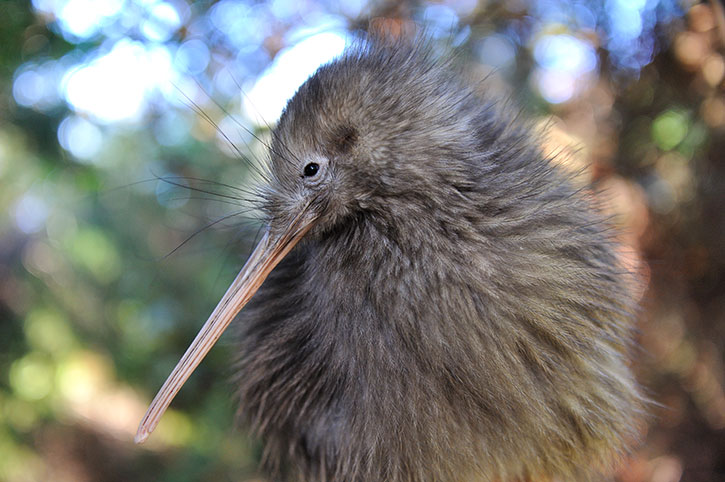 Birdwatching is possible all over New Zealand, but there are certain locations that will appeal to those eager to see native birds and a broad spectrum of species. Hotspots include Kahurangi National Park, Cobb Valley, Stewart Island and Cape Kidnappers. A trip to the Muriwai Gannet Colony also comes highly recommended.

New Zealand is home to a range of species of seals and sea lions and these sedate animals are easy to spot. Gathering on rocky outcrops and islets all over the coastline, it’s very easy to incorporate a seal spotting adventure into any itinerary.

New Zealand sea lions are found only in the waters surrounding South Island, but fur seals are widely distributed on both islands. The leopard seal and powerful elephant seal can also be seen in the cooler waters to the south of the country.

The best places to see seals in New Zealand include Kaikoura, Milford Sound, Wharariki Beach and Sinclair Head. They are usually very friendly and colonies close to land are used to human visitors, but it’s still best to keep a safe distance – both seals and sea lions can become aggressive if they feel threatened.

Penguins are among the most popular New Zealand native animals for visitors from around the world. There are three main penguin species found on the islands, including the little or blue penguin, the yellow-eyed penguin and the rare Fiordland-crested penguin.

Little penguins are the most common species and they can often be seen scuttling along the sands of the Banks Peninsula, which is a short drive from Christchurch. In Oamaru, a sunset trip to the beach affords a glimpse of penguins of both blue and yellow-eyed variety, whilst Munro Beach is the place to go to see Fiordland-crested penguins – the second rarest type of penguin in the world.

Penguin spotting in New Zealand can be done via organised tours, but visiting the sites listed above can also provide unexpected encounters. When watching penguins, keep well back, as they tend to get scared by sudden movements and unfamiliar noises. 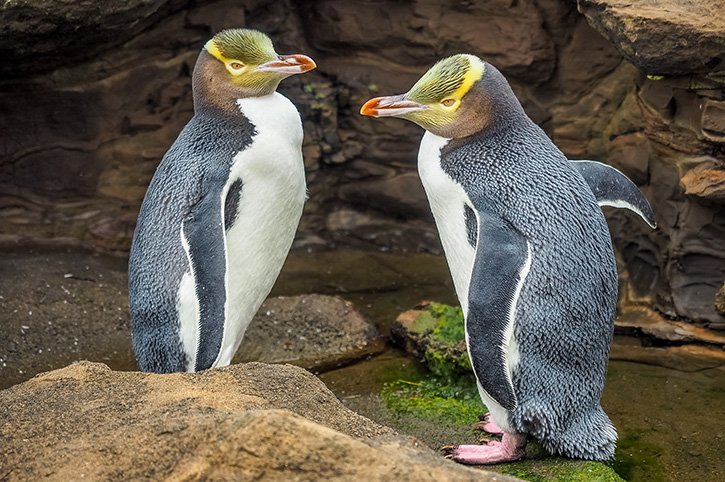 New Zealand offers a raft of wildlife encounters and excursions. With a diverse range of native species residing both on land and in the waters surrounding both islands, it’s possible to enjoy some incredible experiences.

Whale watching is a major draw for visitors and this country is one of the best places on the planet to see these magical creatures powering through the waters, posing effortlessly for photos with upturned tails and spouting torrents of water into the air.

Pods of dolphins are also commonly spotted in the waters, as well as vast colonies of seals, sea lions and penguins. There’s an array of native bird species on display too and sea birds can usually be spotted patrolling the skies and searching for prey during whale watching and dolphin tours.

New Zealand is one of the most enchanting countries on earth, both in terms of its wealth of spectacular views and its diversity of wildlife. There’s nothing better than getting to know the local wildlife of New Zealand, enjoying its scenery and breathtaking views at the same time. new Zealand is certainly one place that affords wildlife opportunities in spades.