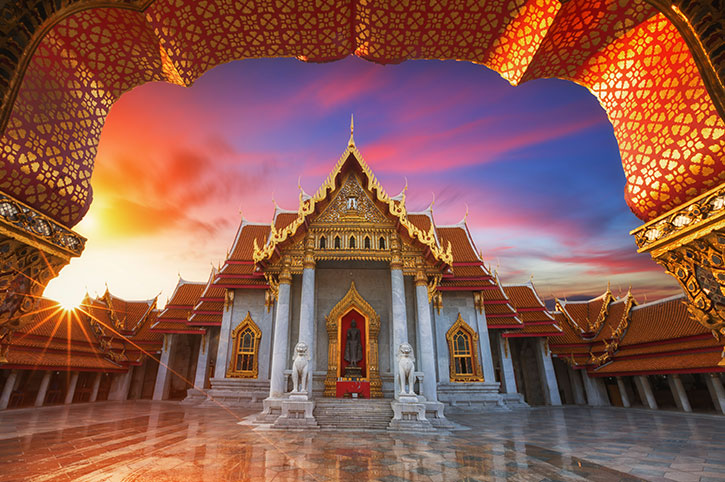 There are hundreds of reasons to visit South East Asia. The beaches, the food, the culture and the nature are all attractions to tourists from all over the world. In Thailand, Vietnam, Laos and Cambodia, the beauty and the history of the land is a huge draw for tourists wondering where to visit in Asia. But part of the cultural significance of the area lies in the hauntingly beautiful temples of Asia.

They play a large role in the history and the culture of the region, of course, but to the eyes of visitors, the temples are also part of the landscapes and are often unlike anything they’ve ever seen before.

Discover the top 10 temples of Asia, starting with Cambodia’s Siem Reap and Angkor Wat. It remains one of the best examples of the genre, and sets the tone for the rest of these simply stunning holy places which are all worthy of a visit in their own right and absolute must-sees on your Asia holiday.

The temple of Angkor Wat is the most famous Cambodia temple. It was built in the early 12th century in the traditional Khmer style. Today it sits in the centre of the monumental complex of Angkor and is classified as World Heritage Site by UNESCO, making it a top priority for most if not all visitors to the area.

Initially created for Hindu worship of the god Vishnu, it has since been dedicated to Buddhist worship. It is the largest and best-preserved temple in Angkor, making it probably the most touristic place in the country and has even become a symbol of Cambodia, appearing on the nation’s flag.

One reaches the central sanctuary by walking up 12 very steep stairs that represent the difficulty of reaching the kingdom of the Gods. Today, the Buddha statues around the site show the change of religion over the centuries.

A trip to Angkor Wat at any time of day is a stunning experience but sunrise on the temple early in the morning is something special. As soon as the sun is up over the temple, the crowds will appear, but this is the perfect time to head to the following temples around the Angkor site to enjoy the area without the hordes of tourists who are about to come.

Angkor is not the only place to find similar temples nearby, however. Spread over the region are more wonderful discoveries to make, such as:

Book your Temples of Angkor Tour as part of your holiday to Cambodia.

There are few sights in the world as magical and as captivating as Ta Prohm. Even on the approach to the temple, visitors feel a different atmosphere as they get closer to its doors. When they finally do enter, they find themselves in what looks like an unexplored and hidden realm.

For a few minutes, feel like an explorer entering a forbidden land. The idea is to stand at each corner and enjoy the silence and let your eyes fill with this union between nature and man-made architecture.

See how each brick and stone is in its rightful place and remains standing by the grace and favour of the man-built addition to nature which does a great job of blending into the surrounds.

The next stop on temples of Asia top 10 takes us away from Cambodia and across the border into Thailand. This is probably the country with the highest concentration of temples in Asia and locals worship and care about all of their temples.

Bangkok is a city that won’t be new to tourists in the area and is one of the most famous places in Asia. But despite its delights as a town, it also has some of the region’s most iconic temples which are well worth a visit too.

Wat Pho or Wat Phra Chetuphon, a stunning temple sheltered behind large white walls with 16 interspersed gates, is the oldest and largest in the country. It forms a complex comprising several buildings and a monastery housing 300 monks.

The original sanctuary, erected in the 16th century and renovated by Rama I in 1781, did not take its true historical dimension until the 1830s, when Rama III gave it a major educational role with the creation of a school of traditional medicine and massage.

Today, the site remains the premier teaching centre of the capital and the also the premier university in the country.

After crossing the main entrance, visitors come out into the courtyard of the splendid reclining Buddha, measuring 46 meters long and 14 meters high.

It fills all the interior space of the wihan. Made of bricks and plaster, the work is entirely covered with gold leaf. It is one of the most sacred places in Thailand, along with Wat Phra Kaew, the next temple on our list.

You can visit Wat Pho on our half day City & Temples tour from Bangkok.

The Temple of the Emerald Buddha – Wat Phra Kaew in Thai – is located in the complex of the Grand Palace of Bangkok, in the historical centre of the Thai capital.

This is the most important Buddhist temple in Thailand. It is the home of the legendary Emerald Buddha which is made of jade with a dress made of gold thread.

The Royal Monastery of Phra Si Ratana is an impressive space, with a dazzling view as the sun rays meet its golden walls and the paintings of the interior walls.

It is a monument reflecting the wealth and power of the monarchs of this country during the last two and a half centuries. You will also find an impressive copy of the Angkor Wat temple of Cambodia in the courtyard.

Take time to also discover Ayutthaya and the Grand Palace during your holiday to Bangkok.

Northern Thailand also has a lot of sightseeing to offer and some of the best temples to discover.

Moving further north than Thailand, the next country on our list is Myanmar, where the temples and pagodas of the region have survived fires, wars and bad weather. It is the Southeast Asian country which has the largest number of Buddhist temples.

The first site to see is certainly Rangoon. It is here that you can discover Shwedagon, the most sacred pagoda of the country but also the most majestic temples in the country.

The Shwedagon Pagoda is one of the most beautiful Buddhist temples of Asia and it is also the most famous pagoda in Myanmar, with its bulb covering made with 700 kg of gold.

This Buddhist temple dates from 1387, it was originally built by the Burmese during the occupation but then the temple was left abandoned and fell into ruin before being restored again. The stupa is 100 meters high and is covered with a gold plating.

Here visitors can observe the customs of Buddhists in prayer, offering water and flowers. It is one of the most sacred places for the people of Myanmar because it contains the relics from four Buddhas. The cane of Kakhusanda, the water filter of Konagamana, a piece of Kaspassa’s tunic and eight hairs of Gautama.

Visitors must remove their shoes before walking in the entrance and, for reference, prayers are done in circles counter clockwise. Once night falls, it’s quite a spectacle, full of faithful praying, songs, smells and especially watching the world pass by.

Whether it is Taoism, which is a typically Chinese religion, or Indian Buddhism, the temples and monasteries of these two religions are quite similar.

In terms of architecture, it is impossible to tell the difference between the two; only the deities represented make the difference.

Discover Shwedagon Pagoda and much more on a 5 day private tour Taste of Burma. 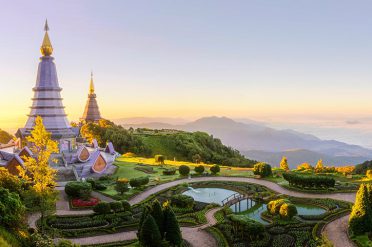 This magnificent temple is located in one of the largest Chinese cities: Wuhan in Hubei Province. This Buddhist temple is particularly important in the history of Chinese art and is one of the most beautiful temples of Asia.

At the foot of the tower is the big bell of the temple. The first building was built in 233 AD. Over the past two millennia, the tower has been destroyed and rebuilt several times. The last restoration dates from 1985. 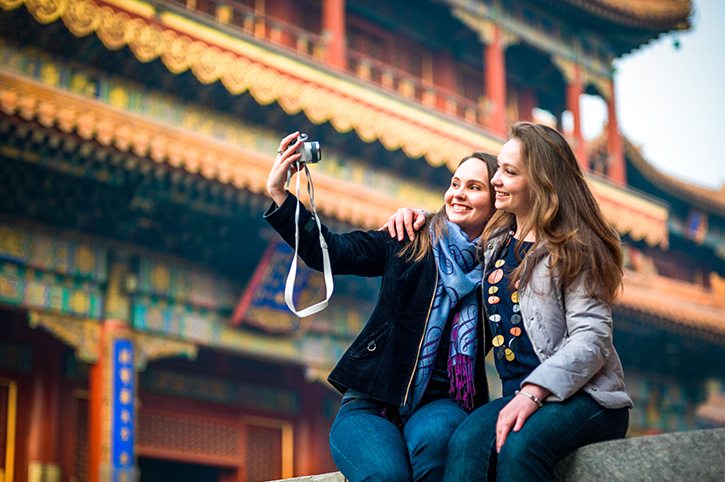 Yonghegong was built during the Qing Dynasty. It covers 66,500 sqm and has no less than 1,134 rooms, many buildings, and 7 large courtyards.

In the beginning, this was the residence of Emperor Yongzheng, then upon the death of the emperor in 1735, he was buried in one of the halls of the palace. In 1744 that the site was transformed into a temple.

Also in Beijing, the Lama Temple – a popular name of the Yonghegong – is one of the largest Tibetan temples in the city and one of the most beautiful temples in Asia. It symbolizes the bond of fraternity between China and Tibet. 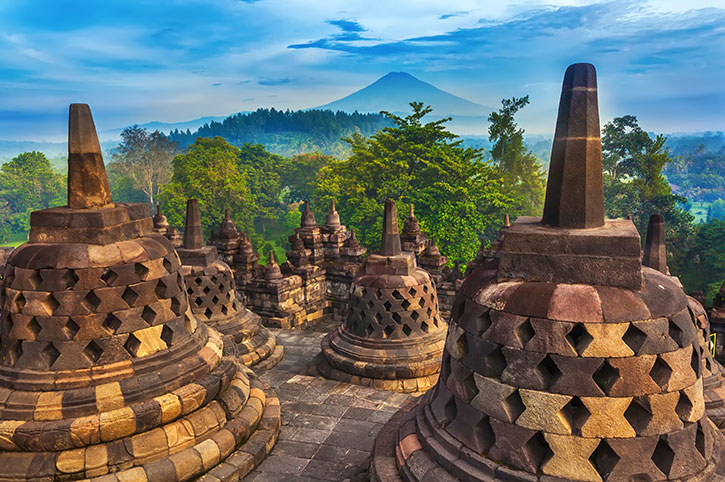 Away from China, Indonesia has many temples but the vast majority of them are found on the islands of Java and Bali. All these temples, more or less preserved, evoke the feeling of traveling back in time to discover the culture of this beautiful country.

Candi Borobudur was built in the 8th and 9th centuries on the island of Java and this should be one of the key visits for any trip to Indonesia. It is also the most visited place in the country with 2.5 million visitors each year.

This huge ensemble is built on three levels. It is easily recognizable thanks to its ornaments in the form of bells arranged in quincunxes. These bell-shaped monuments are in fact stupas, the openwork domes that house the many Buddha statues inside of these temples. But unfortunately, many of them are missing today.

You can visit the Brodubur temples as part of our 12 day Highlights of Indonesia small group tour.

Located on Mount Gunung Agung’s hills, the Hindu temple Pura Besakih is huge, the largest temple in Bali. This temple with flamboyant colours is the most revered on the island and dedicated to the three deities Shiva, Vishnu and Brahma.

This site remains privileged by locals for traditional ceremonies and you will discover that in Bali they have a lot of them! This is, therefore, the ideal place to observe the customs of the Balinese.

Do not hesitate to stay in the temple until sunset as the view of the surrounding area is simply superb!

Let’s move into Japan now, or Kyoto to be specific. With more than 1,500 Buddhist temples, 400 Shinto shrines and 17 UNESCO World Heritage sites, the vastness of this city’s heritage alone is dizzying. The temple of Kinkaku-ji, the golden pavilion, is undoubtedly the most famous temple in Kyoto, or even Japan.

Discover this architectural marvel, as well as other buildings including the silver temple and the tea house.

There are hundreds of thousands of Buddhist and Hindu temples around the world, most of which are of course in Asia. In fact, it is impossible to mention all the most beautiful temples in Asia because of their sheer number so there are many others totally worth visiting.

There is no need to be religious or a believer to be enchanted by these temples, either. Some delight with their goodness and harmony, others will carry visitors through the centuries, and others still make tourists feel like explorers who have just made an epic discovery.

In any case, temples are a part of the life of locals and help show the culture and history of each unique country. These are just some of the historical treasures that pass down Asian cultures from generation to generation, and are very much worth your time.

Uncover all the best temples on an exciting Asia multi centre holiday.

« 10 Places To Visit On The East Coast USA
Wildlife of New Zealand: Where to Go & What to See »